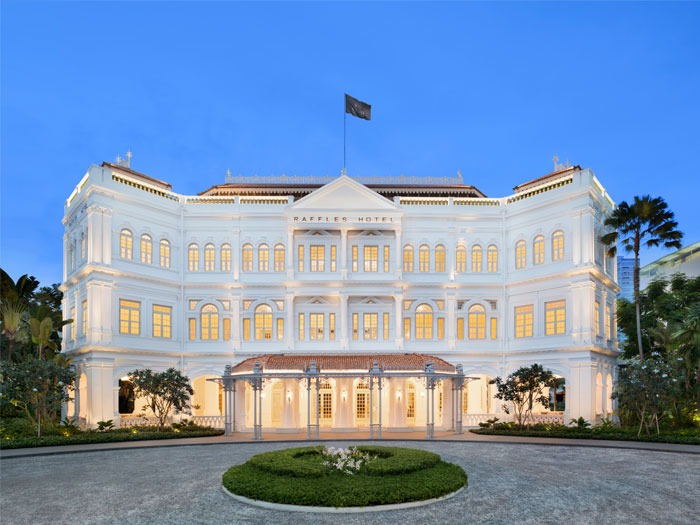 The Raffles Singapore Hotel re-opened last year after an extensive refurbishment. The Champalimaud Design interiors and Tino Kwan lighting scheme are a delicate layering of modernity, authenticity and refined beauty bringing the historic site to life.

In August 2019, the famous Raffles hotel in Singapore revealed its extensive renovation. With interiors completed by Champalimaud Design and a new lighting scheme by Tino Kwan, Acting Editor Sarah Cullen sits down with Partner and CEO Ed Bakos of Champalimaud and Lighting Designer Tino Kwan, of Tino Kwan Lighting Consultants, to find out more about the magnificent project.

Raffles Hotel Singapore first opened its doors to guests in 1887, the old bungalow-style building offered 10 rooms to tourists visiting the Far East. It quickly established itself as one of the most notable hotels in the region and the name expanded to opening international destinations in the ensuing years. In 1991, the hotel completed a full restoration that lasted two and a half years, which returned the building to its former glory replicating the elegance of its heydays in 1915.

Holding such national importance and international reputation, special attention was required to ensure the preservation of the original colonial architecture was maintained throughout in its latest refurbishment by Champalimaud Design.

The monumental renovation plans began back in 2013 when Katara Hospitality invited Champalimaud to participate in a design competition for the renovation. “They were looking for a design studio to help them update the iconic property with an elevated and contemporary point of view, while also remaining true to its historic roots,” explains Bakos.
Kwan and his team were introduced to the project in 2014 and worked closely with Ed Bakos and interior designer Jon Kastl, also of Champalimaud, throughout the project: “We were invited by Aedas Singapore to be part of the design team, as the team members of this project required extensive experience in listed and historical buildings. This project took five years to complete from August 2014 to August 2019,” says Kwan. 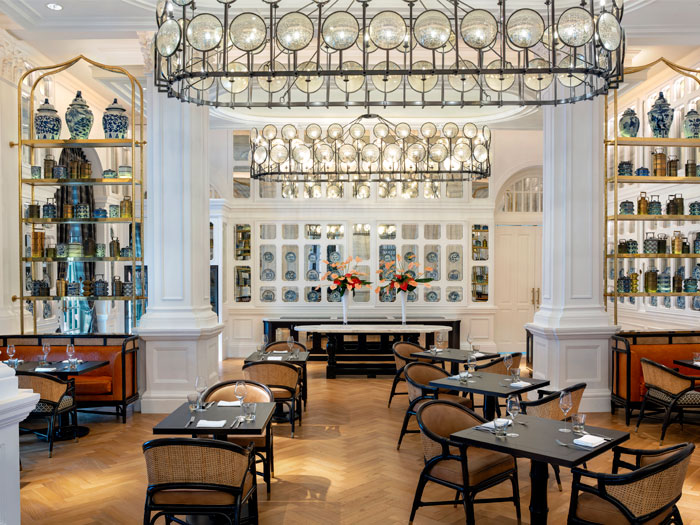 Throughout the hotel, space usage and flow were re-considered in the public areas to increase social engagement and create an ease of flow. With a sensibility that is much more contemporary than its previous design iterations, there was an emphasis on maximising scale through the careful curation of custom furniture in sumptuous shapes, ornate screens, locally sourced heritage antiques, and impactful lighting. The reception area and lobby lounge were transformed into an elegant reception and now serves as a gateway to the hotel’s alluring dining spaces: The Tiffin Room, Writer’s Bar, La Dame de Pic, Long Bar and Butcher’s Block. The colours used throughout this area are composed of the original black and white contrasts juxtaposed with caramel, shades of green, and creamy neutrals. Light floral references and gilded trimming along with a bejewelled chandelier from Preciosa add a layer of refinement to the overall vision.

“The client wanted to maintain its original colonial ambience, tranquil garden setting, classical architecture, and in addition, the new design was required to rejuvenate and inject new life to the hotel,” says Kwan. “We needed to employ the latest lighting technology, equipment and careful consideration to the lighting installation details in order to minimise the impact to the existing structure in order to achieve our design intent.”

Bakos adds: “Decorative lighting was essential – as important as choosing the other design details like the colour palette or finishes. Raffles is such a grand hotel, we knew we needed to use impactful lighting to mould each of the spaces we designed, create a sense of intimacy and to also invoke a feeling within the different spaces depending on what those rooms were used for.

“One of the best examples of how decorative lighting impacted the spaces at Raffles is within the lobby. Our goal with that particular space was to encourage more socialisation. In earlier iterations of Raffles Singapore, the hotel served as a social hub, a place where dignitaries, locals and celebrities would congregate for events, meetings, or to just hang out. We wanted to bring that kind of energy back to the hotel especially in that space,” he adds.

“In some of the most iconic hotels, chandeliers were the centrepiece of such social spaces – they weren’t just jewellery for the ceiling but a way to ground the guests and the location; they were key to creating a sense of place. This is one of the reasons why you’ll find a custom statement Preciosa chandelier in the lobby. We also wanted to create intimate moments within the open plan area. To do that, we used decorative lighting to shape and create additional ‘spaces’.”

Adding to the lobby’s lighting treatment, Kwan explains: “Decorative lights were selected to complement the interior and provide appropriate ambience to each space. The huge chandelier in the main lobby was the signature in the hotel. We worked very closely with the interior designer, manufacturer, and the constructor to ensure the colour temperature and lighting effect were according to our design intent and the motorised chain system for lifting [the chandelier] up and down for maintenance and cleaning was technically sound.”

Concerning the design inspiration of the bespoke piece, Preciosa tells darc: “The main chandelier was inspired by the lotus flower and craftsmanship and technical ingenuity played a big role in ensuring the chandelier is a work of art. Instead of typical tulip-shaped trimmings, the team hand-blew crystal lotus-shaped flowers. There had never been a chandelier in the lobby before, so we had to ensure a relatively lightweight light due to the building’s structure and the fact there is a skylight above it. 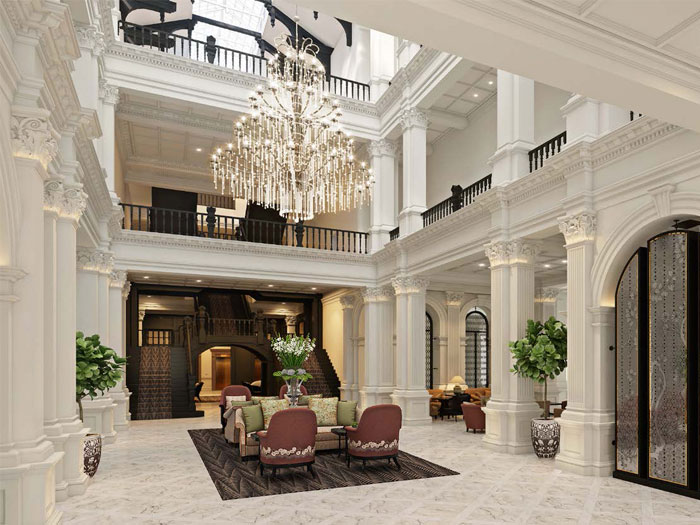 Decorative lighting was also used to full effect in the dining spaces of the hotel. Most notably, La Dame de Pic, the hotel’s signature restaurant, features another custom-designed Preciosa chandelier, featuring polished-brass discs. Surprisingly, the scheme for this restaurant was put together by the Champalimaud team at the 11th hour due to a shift in design direction.

“[In] La Dame de Pic, we used lighting to help create a narrative – in this particular case around the chef Anne-Sophie Pic,” explains Bakos. “For the restaurant we designed a custom chandelier composed of polished brass discs of laser cut spades (La Dame de Pic is a play on ‘Queen of Spades’ in French). We also made complementary wall sconces of similar inspiration as well. Overall the lighting was used to create a soft articulation and to add a subtle drama to the room, complementing the sophistication and refinement of Anne-Sophie’s cuisine.” 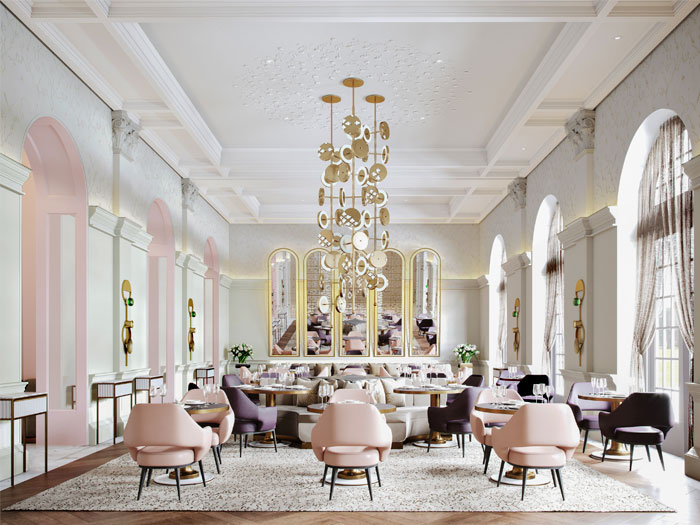 Preciosa adds: “We also created two pieces for La Dame de Pic, a contemporary chic restaurant featuring pastel shades and natural decorative elements such as leather and wood. ‘Pic’ in French is a card game and the team took inspiration from the playing cards used to design a central chandelier and decorative wall.

Elsewhere in the hotel, a Lasvit chandelier is featured in the Writer’s Bar and In Motion architectural lighting was used to provide the functional aspects of the spaces.
“In general, all decorative lighting fixtures were selected to be part of the decorative elements to enhance the interior design concepts while all architectural lighting fixtures help to provide proper illumination to a space and to highlight focuses of interests; such as flower arrangements and art pieces etc.,” explains Kwan. 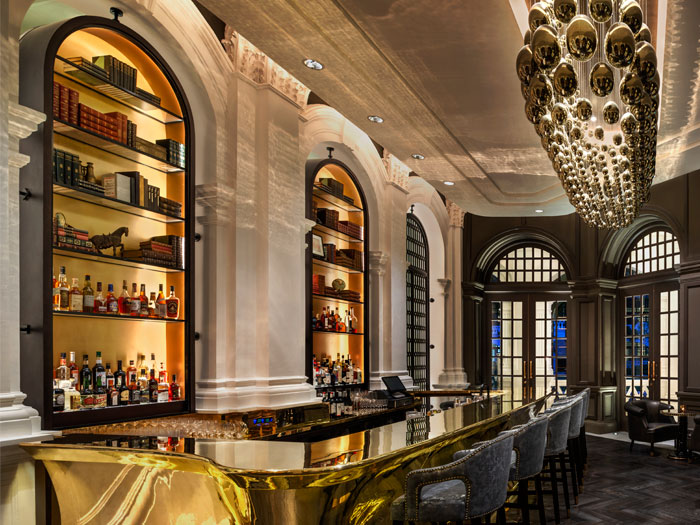 “It was neither possible nor desirable to install burial types of light fittings into the building, hence in many cases, custom housings were designed to conceal lighting fittings, which could be blended into its architecture as the building is over 100 years old.

“All architectural light fittings were chosen by our company based on their technical performance such as lighting outputs, colour temperatures, colour renderings, beam angles, and dimming capabilities, etc. Whereas the interior designer was responsible for choosing all decorative lighting fittings.

“Afterall, this is an existing and a heritage building where there are lots of limitations and constraints as to the installation method of light fittings on to the building externally or internally,” he adds. “Most of the solutions were decided on-site as how the conduits were run and light fittings were installed without damaging the structure of the building.

“The standout lighting features perhaps are the burial uplights to highlight the details of the columns in the lobby, of which such lighting design approach was not possible 100 years ago.”

Overall, the end result of the Raffles’ refurbishment is a beautiful harmonious design that brightens and freshens the traditional building, whilst paying respect to its heritage and historic importance in Singapore and the international hotel community.
Reflecting on the project and the results of their design, Bakos adds: “We didn’t face too many challenges when it came to fulfilling the client’s wants and desires. From beginning to end, we were all fairly aligned in our vision for the renovation of the hotel. Everything was designed to work harmoniously with one another.

“We were quite pleased – the project didn’t stray from our initial design concepts. The only thing that changed (and actually for the best) was the inclusion of the La Dame de Pic restaurant in our scope. The restaurant came fairly late in the design process – but it made for a really wonderful addition to the work we did for the client. “Overall the lighting adds a bit of magic and enchantment to the hotel. It gave each room shape and a character of its own.

“We’ve built a reputation for working within iconic and historic hospitality spaces – however with this hotel there was a huge emotional and historical relationship that Raffles has with the country of Singapore and its visitors. It’s a highly visible hotel. We were being trusted to care for and, in some ways, reshape the country’s most precious gem. That’s a huge responsibility! We were so honoured to be hired to do this job. This was a dream project for our team.”

Looking back on his experience working on this iconic project, Kwan reflects with similar sentiments to Bakos: “We are very pleased with the result of the lighting and this includes the client and the design team. The success of the lighting not only gives the hotel a complete fresh look but also brings back the historical nostalgic and its value. All the decorative lighting aspects were carefully selected together with the design team to ensure the lighting output, colour temperatures and effects would provide the ambience most appropriate to each space.

“We are very pleased with the overall result and the working relationships with the clients and design team and there is nothing we could think of to change it for the better.”