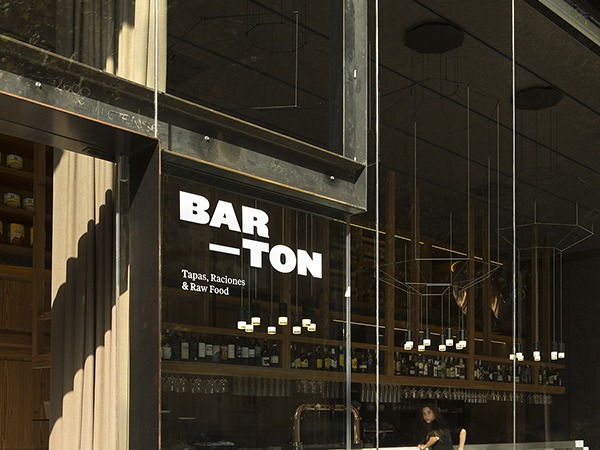 On a bright corner of Barcelona’s Eixample neighbourhood, interior designer Isabel Lopez Vilaita has transformed a delicatessen into the Barton restaurant, specialising in traditional local cuisine, tapas and raw food.

The raw food school of cooking brings an avant-garde aspect to Barton’s offering both in terms of its innovative approach and cooking techniques. The result is a delicately sensitive cuisine with an imperceptible scientific foundation, concepts which have been transposed onto the space through the lighting scheme featuring lamps such as Wireflow produced by Spanish company Vibia.

The strong graphic character of these lamps designed by Arik Levy provide a poetic touch and yet at the same time are very high-tech. The lamps’ wires define its graphic and delicate tracery, which seems to hang from the ceiling like some ethereal stray wiring.

Such a large scale lighting scheme creates a very particular ambience in a restaurant where the huge floor to ceiling windows of the facade blur the boundaries between the interior and the street outside.

Vilalta explained: “We retained these wonderful windows from the previous incarnation but it presented a big challenge because we had to create a specific atmosphere within a space, which, because of the large windows, feels like being in the middle of the street.”

The row of Wireflow fittings strung out along the transparent divide where the dining tables are organised, also helps to subtly define the street boundary while maintaining visual continuity with the outside.

Vilalta’s studio was also commissioned to custom design and produce almost everything else at Barton. The panelling was made using recycled wood which transmits an aged quality to the bar counter and furniture, while high tables are combined with In Between chairs by Sami Kallio for tradition and low plywood lounge chairs originally designed by the Eames for Vitra.

The kitchen is connected with the dining area via a screen of open shelving which lends depth to the space and facilitates a fluid and direct communication between the chefs and the waiting staff. The felt used to cover the walls and ceiling, provides a warm ambience and contributes to the overall acoustic comfort while the coloured cushions bring a laid back whimsical element to the space that is an experience for all five senses.