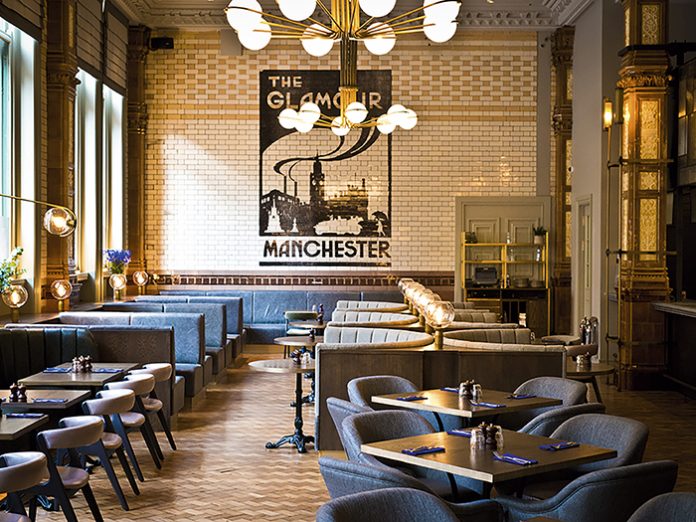 The Refuge bar & restaurant at the newly renovated Principal hotel in Manchester, uses decorative lighting to introduce pockets of space and a cosy atmosphere into the previous vast business hall of the Refuge Assurance building.

The renovated Palace Hotel in Manchester, UK, is now the flagship hotel of Starwood Capital’s new luxury hotel group ‘Project 1898’. The grade II* listed building was originally constructed for the Refuge Assurance Group in the late 1800s, and subsequently extended twice in 1910 and 1932; the building was converted into a hotel in 1996.

With it’s striking red brick and terracotta cladding, and iconic clock tower, the hotel is a landmark building in Manchester, situated close to both Oxford Road train station and Deansgate tram interchange. Internally, three buildings each have their own character, but are linked with the use of timber panelling and extensive coloured tiling throughout. Newly named the Principle Hotel, this most recent renovation began in early 2015 and continued until September 2016 with the completion of the final rooms and the food and beverage areas.

Throughout the hotel, whether looking at the rooms, the F&B or the conferencing suites, the design has been driven by a desire to accentuate and celebrate the extraordinary building. With this as the brief, the designs are simple and luxurious. Architectural practice Michaelis Boyd has developed a scheme that highlights the rich heritage of the original building, accentuating the original tiling, with its varied and strong colours, and the beautifully carved timber panelling. Colours used respond to those of the tiling, and are muted so as not to draw attention from the existing fabric of the building. In addition, the furniture selected and designed makes use of simple raw materials, such as oak, brass and leather, which have their own personality but work well against this vibrant backdrop.
In the public areas this philosophy has been applied to a greater extent, sensitively dividing up the F&B spaces with low-level glazed screens to maintain the impressive scale of the Refuge Assurance Company’s old business hall. Everything has been designed to complement the uniqueness of the building itself in order to introduce new comfort and luxury into a space filled with history and idiosyncrasy.

Focussing in on The Refuge bar and restaurant area, which is run by Manchester-based Volta, this vast space is now the true centre of activity and interest at the hotel. The previous large business hall had been partitioned up and painted over, hiding the incredible scale and rich tiling. Michaelis Boyd’s design has sought to return the space to that glory, removing partitions and repairing original details throughout.

While a 10,000sqft double height space does not immediately lend itself to intimate dining or a cocktail bar, Michaelis Boyd has divided the space with large crittal screens that allow views through but provide a number of spaces within, that each have their own function and personality. The restaurant is lit with bespoke decorative light fittings designed by Michaelis Boyd in association with Northern Lights – from the large brass pendants hanging from the coved ceiling, to lower level pivoting lights that reach over from the banquettes to cast light on to the dinner tables.

In the bar the emphasis is on intimacy and comfort, with leather chesterfield sofas and upholstered wing chairs, and a long curved banquette seat that creates, with low level lighting hanging over from the wall, cosy areas for groups to sit within a much larger space. A long bespoke table has been made for people to sit and work during the day, and a large communal table sits in the centre of the space to allow smaller groups to socialise.
The bar itself is clad in a water-jet cut copper with lights set behind, giving a warm glow visible as you enter the space from either the hotel or the street. Behind it, bottles line shelves that back on to the crittal glazing, with views through to the Winter Garden. This sits under a large original roof light, and surrounded on all sides by crittal glazing has the feel of an atrium or conservatory. The tiled floor and metal framed furniture work alongside two large trees and large amounts of greenery and planting to accentuate the relaxed outdoor feeling.

Last but not least, The Refuge plays home to the Den. With a low level structure above supporting lighting, this is a more intimate space with higher seating, pool and foosball tables, and a custom designed dispense bar that folds away to look like an oversized roadie’s travel case.

“We put a lot of effort into creating something that had its own personality but complemented the building’s heritage,” Luke Rowett, Senior Architect at Michaelis Boyd tells darc. “The rest of the hotel is slightly more understated, whereas the bar and restaurant is the epicentre and has a lot of activity going on. It’s definitely got a bit of a schizophrenic personality!

“It’s a delicate balance between lots of different personalities for the restaurant, den, Winter Garden and bar. They’re all connected and there’s a common theme running throughout the design but they each have their own feel to them, as each space is used in a different way.”

For Rowett the decorative lighting elements played a key role in creating these different ‘personalities’, working to bridge the gap between the new and the old. “The decorative lighting created little pockets of space that hightlight elements and create areas. Some of this was down to the structural constraints we had to work around. We weren’t able to put fixtures everywhere we wanted as we couldn’t drill into the tiled columns, so we had to come up with interesting ways of using the lights to create a really nice localised space, so it feels like you’ve lit just that specific area you’re using at that time.

Having enlisted the skills of lighting design practice LDI, which was principally responsible for the architectural lighting at The Refuge, the Michaelis Boyd team were able to exploit their experience to inform how architectural lighting was used alongside the decorative elements to add drama to the space. “Any project needs an element of both architectural and decorative,” Rowett tells darc. “If they’re thought of separately then there’s going to be clashes and issues, it’s really important to get an understanding of the design… how the space is going to be used, where you actually need light and where you can afford not to have it – that is the key.”

While a select few lighting pieces were specified, the vast majority of lighting featured throughout Principal and The Refuge has been bespoke designed by Michaelis Boyd in conjunction with the previously mentioned Northern Lights, featured throughout The Refuge; Chelsom in the Excalibur Rooms, Oak Rooms and Ballroom; and Heathfield Lighting in the guest room bathrooms.

“We like to create bespoke pieces as and where we can,” says Rowett, “and particularly for this project, it was hard to immediately think of ‘off the shelf’ products that would fit in with the space, so it was a really good opportunity to design something that worked in exactly the way we needed it to.

“Take the column lights in the restaurant for example. They are large, vast structures that are quite slender and have a light at the top of them. We weren’t allowed to fix the lights to the columns in any way and so they’re braced against the column using a rubber stopper – so they’re freestanding if you like. They’re really interesting pieces and highlight the heritage columns without ruining them.

“Our approach to every project is that if there is a constraint or structural issue, we should work with it, as it creates a richer design and in turn can become part of the brief. As it stands now, there’s nothing we would introduce from a lighting perspective on top of what’s already in place but we had to go down various routes before we got there.
“For me personally, it was a great experience working with the lighting companies on all the different elements featured at the hotel,” continues Rowett. “They were all incredible – for us to be able to come up with a design and then work through with them, how it would actually happen is a great thing to be able to do.”

As with most projects, the balance between lighting and the flow of natural light was another key consideration for this project and the end result creates a really nice change in the building throughout the day. This goes hand in hand with how the space is expected to be used as Rowett explains: “The large roof light in the Winter Garden has the hotel all around it – going up as far as four storeys, so the light you get through that is filtered – apart from midday when you get sunlight coming straight down. So the roof light is important because the sunlight comes through but there’s also a real necessity for additional lighting because while there’s lots of windows around the edge of the building, it’s not direct bright sunlight.

“During the morning when the restaurant is being used for breakfast, lighting isn’t such a big thing, because natural light is quite prevelant, as it is in the bar throughout the day while people sit and work… then as you move into the early evening the lighting elements become more of a feature and the venue turns into an intimate, fun space that you can eat, drink and play in… the lighting really does inform what’s happening at different points in the day.”

Brought back to life during a time when the food and beverage scene was changing quite dramatically in Manchester meant The Refuge design was continually pushed, progressing at every stage, however the end result is a space that is a welcome addition to the city centre. For Rowett, while the project experience was an intense one, when completion day came it felt as though something quite special had been achieved, telling darc: “It’s such an incredible space on its own and to be able to have a positive impact on that space is a really nice feeling. I was travelling up to Manchester every week for almost a year and it became a huge part of my life – for better or worse I became completely immersed in it. I’m from Yorkshire originally and spent a lot of my teens going over to Manchester and so I knew the building already – it is a pretty noticeable landmark and part of the city’s history. For it to have been what it once was and now is, particularly with everything else that’s going on in Manchester, it feels like we’ve had a part in the rebirth of the city following the recession… that’s a nice feeling.”