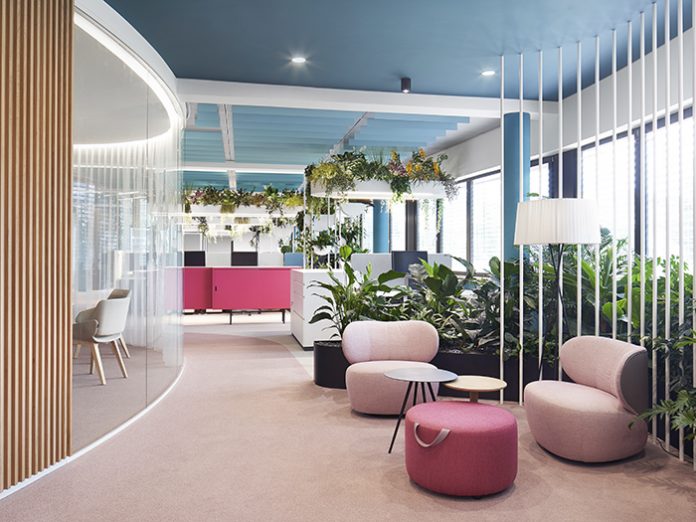 Interior design architects Ippolito Fleitz Group collaborated with Porsche Consulting and pfarré lighting design to complete the transformation project for global design agency Roman Klis’ office in Herrenberg, Germany.
The project brought together the agency’s brand identity and insight on behavioural science, which brought a substantial contribution to boosting the productivity of the employee workforce.

When Ippolito’s team took the brief on, they fully immersed themselves into the science and culture of a working space, claiming that, “Smart solutions require a fundamental understanding of the organisational structure in question: Work worlds only fulfil their objective if they succeed in infusing the space with the spirit of the company.”

The success of Roman Klis as a designer is very apparent in his work ethos and commitment to ensuring his team has the best possible environment to work in. As described by the Ippolito team, “his mission is to breath soul into his brands. Klis understands the importance of a thinking space and an appreciative leadership style, particularly when it comes to creative endeavour. Yet, despite his friendly nature, a good entrepreneur is always concerned with strong performance: ‘Our claim is Creating Success. Though we live for impeccable, beautiful design, it must be based on a strategy that is on a straight path to success’. All of this should be rendered tangible in the new interior design.”

Katja Möbs, Project Director at pfarré lighting design, spoke about her team’s involvement in the project with darc: “The interior architects, Ippolito Fleitz Group, asked us to assist them in the refurbishment of an existing design agency ion the outskirts of Stuttgart. The aim was to create a vibrant new work office for creative people, with the working title ‘The Maldives of Design’. The initial brief for the lighting design was to support, strengthen and highlight the colourful interior concept, full of plants and fabrics. A crucial feature of the design were the huge planted task lighting elements over the work spaces.”

One of the challenges the teams faced was to completely transform the building without interfering with the existing structure. A lot of this was achieved with the decorative lighting features. “The aim of the lighting scheme was to underline the colourful, vivid and close-to-nature concept of the whole refurbishment,” explains Möbs. “Big pendant luminaires made of bamboo transport a touch of the Maldives, with other decorative luminaires cautiously interwoven within pendant plant containers. This was a new challenge for us, as there was a huge amount of plants partly integrated into the lighting elements.”

As part of the design scheme to promote a healthy and inspiring working environment, Ippolito’s team introduced Dr Freibichler, from Porsche Consultancy – working with the team’s scheme to integrate a success strategy called ‘nudging’. As part of this project, Freibichler was responsible for a variety of insights that complement the space. This partnership formed a basis for a holistic interior concept that reconciles the human element with business objectives in a playful way. ‘Nudging’, as described by the Ippolito team, is an organisational development that employs findings from behavioural psychology in a subtle yet targeted way. Using minute, yet considered, interventions in daily processes, employees are guided effortlessly towards greater productivity – it works with human instincts rather than against them.

The design concept introduced a staggering 2,100 green houseplants into the workspace. “They engender a good mood, lower stress levels, boost creativity and enhance performance,” Ippolito’s team explains. “Moreover, they improve air quality and overall well-being, as well as diminishing noise levels.” As a result, the newly greened interior spaced was reported to have an increase in humidity from 18% to 44% and a decreased number of employee sick days by 50%.

Sustainability also played a key part in the renovation, so after completing a detailed survey of the existing fixtures at the beginning of the project, the team at pfarré established they could re-use some of the existing luminaires as LED profiles, fluorescent pendants and pendant LED-rings.

“The main lighting elements – the custom-made pendants over the spaces – are almost a hybrid between architectural and decorative lighting. The neat white surfaces and slick, round-shaped form, meant the luminaires served as strong decorative elements. At the bottom, powerful LED profiles with a microprismatic cover emit uniform, glare-reduced light for the computer work stations,” says Möbs. “A variety of artificial plants were placed on top of the luminaires, indirectly lit by a flexible LED strip, which meanders in-between the plant containers. The luminaires were built in three different sizes, making it possible to light two, four or six adjacent workplaces.”

Bow-shaped pendants by Estiluz hang among the plant pendants above meeting tables, adding a sculptural element to the space.

In addition to the lighting design, colour played an important role in creating the desired working environment. Such colour choices included neutral tones for working areas to promote concentration, pale pink was used for the walkways as a proven mood-booster and has also been shown to increase empathy among employees. Tropical wallpaper is juxtaposed with soft shapes and rounded tables in social areas. One of the ‘nudge’ insights, according to Ippolito, states that central Europeans only feel part of a group of up to 24 people; a statistic that was taken into account when designing each zone. Despite this, a lot more space for communication was created overall, which was an explicit request from the client’s employees, but also a requirement of a changing work culture in which information exchange and a sense of cohesion and belonging play an increasingly important role.

Furthermore, a different atmosphere was achieved by changing the ceiling landscape. As it wasn’t always possible for the teams to change the structural fabric of the building, it was possible to update the existing features, which is exactly what they did with the original grey metal ceiling panels. These were re-invigorated with a gradient of blue-coloured strips, which created a new feeling of spatial depth to the room. The blue tones were chosen for promoting creativity and calmness throughout. The gradual progression into white brought an additional openness and light to the space.

Working closely to choose certain colour pallets, pfarré lighting design had to ensure the lighting quality was to the highest standard in order to portray the correct colours chosen by Ippolito designers.

“As initially planned, the lighting elements chosen enhance the vivid colourful interior concept by highlighting the surfaces and the plants. To accentuate the coloured surfaces, all luminaires should emit a uniform light with very good colour rendering,” expands Möbs.

“To avoid competition between lighting and the interior, a small number of decorative luminaires were carefully placed. The bamboo fixtures underline the overall concept, and the seven large apartment 91 custom-made lanterns in coloured textiles in the staff restaurant, situated in a glass annex, makes the space visible from a distance. The pendant LED-lamps give additional light on the tables.”

The end result of the space directly portrays the positive mood that follows Roman Klis. It is not only a workspace that triggers an immediate buzz among clients and employees alike, but above all, it is a dynamic basis for effective, agile working. Ultimately, the performance of the employees was considerably enhanced.