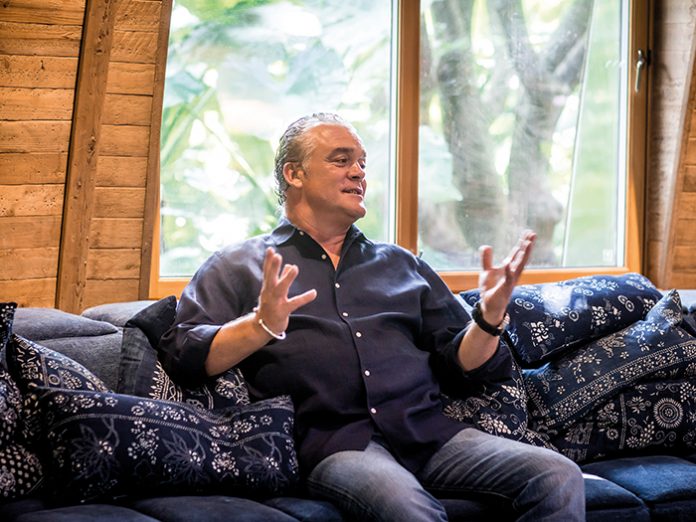 British designer Timothy Oulton has a passionate quest to create extraordinary spaces. Francesca Barnes delves deeper into what inspires him and what it takes to create something truly unique.

A Benedictine school, an Army dad turned antiques dealer, and an obsession with handcraftsmanship and authentic materials. These are just some of the influences that drive Timothy Oulton in his passionate quest to create extraordinary spaces.

For Oulton, his time as a child spent in a Benedictine monastery in Yorkshire, UK, is where he learnt about community and contributing. “It didn’t matter what you did, as long as you did it to the best of your ability – commit fully to something,” he says.

With no intention of going to university, Oulton’s career began at his father’s antiques shop in Manchester, UK. Having worked there for about three months, the soon-to-be-designer quickly got into the business, amazed at the quality of furniture items that the British made over 300 years – even down to the locks and handles – this is where the obsession began.

The transition from antiques restoration to designing came about ten years later. Having learnt about craftsmanship and materials from his father’s store, Oulton realised that with antiques, he couldn’t go any further, he couldn’t build the business he wanted or create as he wanted. The antiques business wasn’t scalable and he wouldn’t be able to contribute to other people’s lives.

While Oulton’s time spent in antiques has been of great influence to many of his projects, as a designer of interiors and products, it all starts with the materials. “Antiques on their own are boring,” he says. “Even the best ones, because there’s no point of view. That’s what I like about what we do – we will take an antique-style Chesterfield and then put a bloody great acrylic coffee table in front of it, and that makes it relevant and interesting.

“Inspiration can come from anywhere. As I think Paul Smith says, ‘If you can’t find inspiration in something, you’re not looking hard enough.’ It can come from a flea market, from a friend’s bag… leather finishes have come from cowboy chaps. I see the creative process as a bit of a quest, a journey. You explore, discover and often end up finding inspiration down pretty unexpected avenues.”

Passionate about using salvaged materials, for Oulton, reclaimed materials have an honesty and a purity. What he likes to call a ‘humble luxury’, where the material is unfinished. “I don’t understand people who get reclaimed wood and then varnish it,” he says.

“You should never have started with reclaimed wood in the first place. If you’re going to use reclaimed then show it, don’t lacquer it, don’t wax it. For instance, I love the English Beam console, we don’t plane the beam, we don’t do anything, we just cut massive pleats into it and I think that’s just epic.”

In terms of Oulton’s lighting range, which has continued to gain some momentum in recent years, all of the pieces borrow ideas from the past but with the Timothy Oulton stamp on them. “We take inspiration from Georgian England to Art Deco to mid-century design – classic, vintage forms, but we reinvent them with a modern viewpoint.”

To fully encapsulate his experiences of antiquity, Oulton uses simple tools and time-honoured techniques; the way it was done traditionally. “I think there was a wisdom in the way things were done many years ago that’s still very relevant today,” he says.

“When something has been made by the touch of a craftsman’s hand you get a level of detail and authenticity that you just can’t replicate mechanically. It’s a great feeling to bring that initial concept or inspiration to life, to see it in the flesh. Stories and history are very important to us, the process of bringing a design into being has to have some meaning.

Design isn’t just decoration, it has to be relevant and have meaning,” Oulton continues. “It always comes down to creating a great experience for people – it’s not enough for a design just to look good, it has to make you feel something. I think some of the best design out there is the simplest – simple shapes but made using incredible materials and meticulous attention to detail. We spend countless hours on our hand-finishing but I always say if something’s easy, I’m not interested in doing it.”

For Oulton, the most rewarding part of working within design is the journey – seeing design as a bit of a quest. “It’s a great feeling to bring that initial concept or inspiration to life, to see it in the flesh.

“There are small frustrations along the way but I try not dwell on these, I’m very much one for dusting myself down and taking everything as a learning opportunity. I think that’s the only way you grow… We say that if you’re not prepared to swim upstream, while everyone else is going in the other direction, then you won’t find something that no one else has seen.”

Speaking more generally, Oulton observes that people are now gravitating to layered textures over the minimal Scandinavian look, which has been popular for a while now. “I don’t believe in less is more,” he says. “Once you’re free of the constraints of a minimal approach you can be bolder.”

As well as product design, Oulton and his team are becoming increasingly known for their interior design schemes. One of his most notable projects is considered to be the 1880 members’ club in Singapore. Having designed all 22,000sqft of it, lighting plays a crucial part in the design. Featured in issue 26 of darc, the project brief was to create a space that sparked imaginiation and encouraged unplanned conversations and collisions.

“We wanted the space to be almost unrecognisable after the transformation and the lighting plays a big part in that,” says Oulton. “It was also very important that the different spaces in the club should all feel connected to one another and we used lighting to achieve this. The private dining room is styled quite differently from The Double café bar, but actually the walls between the two spaces can open up, connecting them for larger events. The feature lighting is the same in both areas, which helps tie them together when the space is opened up.”

While the studio has historically focused on decorative lighting in its collection, Oulton explains that they have had to come to grips with architectural lighting as they’ve moved further into designing projects. “Both are about creating an experience and both should complement one another. Sometimes a dramatic light fitting can build out a space, other times there are different forms, spaces and materials that are the star of the show.

“A good example is in the lobby to our showroom. We panelled the walls and ceiling with a collection of 2,000 oak vintage French doors. They were the highlight, and needed some concealed lighting to accentuate their beauty. We always want to create an atmosphere that is comfortable but at the same time makes each individual feel special. It is the details and considered elements of the design that come together to do this and lighting is always an important part of that.”

Impeccably summarising the company’s ethos, Oulton tells darc: “In this virtualised and digitalised world we live in, there is a growing feeling that we really need to reconnect – either with ourselves or with others, and your interior can certainly play a part in this. Whether it’s down time or entertaining, it’s about engaging the senses and feeling alive. That’s an energy that we try to embody in all our products and interiors.”