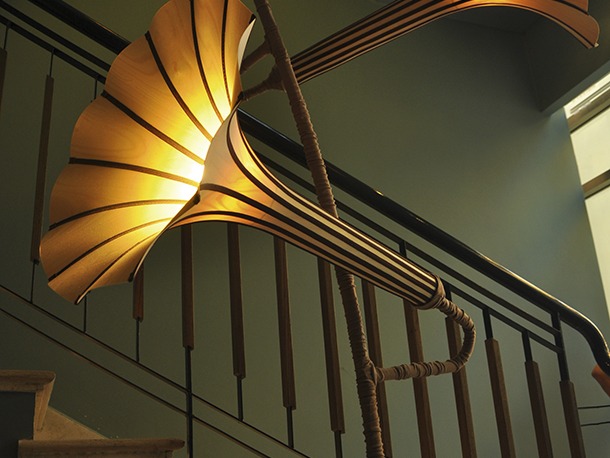 Located on Rothschild Boulevard at the heart of Tel Aviv’s cultural and financial quarter, the Rothschild Hotel occupies one of many modernist classics that make up the White City UNESCO world heritage site.

Built in 1934 in the ‘International Style’, the building recently underwent a complete renovation, creating 25 luxury suites for both short- and long-term accommodation. Included among the hotel’s many design flourishes is a bespoke, ten-metre tall lighting piece that climbs through the centre of the main staircase.

The installation is a collaboration between the interior design team (Michael Azulay and hotel owner Avi Ifrach) and lighting designer Aviad Petel.

The group came together after Petel wrote to the Diaghilev Live Art Boutique Hotel – also run by Avi Ifrach – to enquire about exhibiting some of his recent work on a temporary basis. After reading the proposal, Ifrach came back with an alternative offer – to create a piece for the new Rothschild.

Inspiration for the installation came from the climbing Ipomea Tricolor plant. The ‘stem’ – constructed from rolled metal and wrapped in fabric by designer Orit Barzelai – curves organically through the space. Starting in the ceiling, its descent is unsupported until it reaches its lowest point, just two metres from the ground.

The nine lamp heads are a continuation of Petel’s Grappa range, constructed by sewing together wood veneers to create structurally solid shapes that reference both petunia flower heads and old gramophone amplifiers.

“The installation was tricky,” Petel notes. “There were various constrains including variable angles at every floor and the need for accurate lampshade positioning relative to the stairs.”

With technical assistance from two further team members, Oren Berry and Avi Saina, the perfect balance – both structurally and aesthetically – was achieved. Each fitted with a standard 7W lamp, the Grappa heads emerge at different heights and angles, carefully positioned to throw light towards the stairways, and provide a sympathetic drama to the tastefully restored 1930s interior.