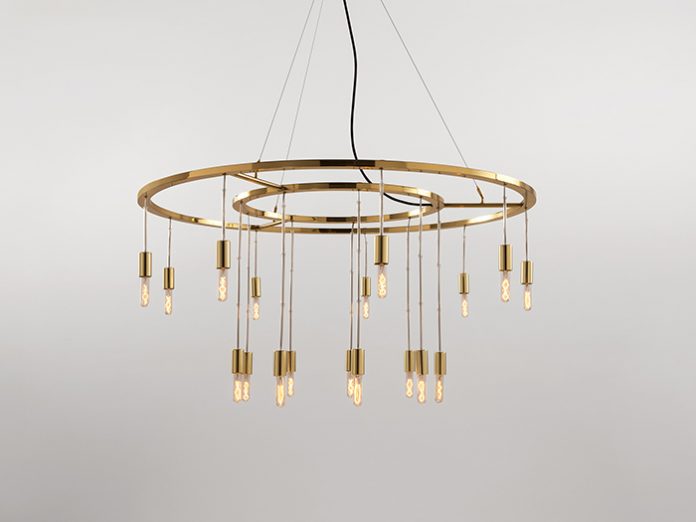 The Vaghe Stelle chandelier was originally created for Brasserie FLO in the early 80’s by Santa & Cole, in collaboration with renowned architect and designer Antoni de Moragas i Spa. Re-issued for 2016, as part of the brand’s 30th anniversary, darc takes a closer look at this significant historical design.

Founded in 1985 by Nina Maso, Gabriel Ordeig and Javier Nieto, Barcelona-based lighting brand Santa & Cole has, over the last three decades, developed an impressive catalogue of contemporary and historic lighting by Spanish and internationally recognised designers.

As part of its 30th anniversary celebrations, this year, the company has reissued its Vaghe Stelle chandelier, originally designed in collaboration with renowned architect Antoni de Moragas i Spa.

Reflecting on the Vaghe Stelle’s roots, he tells darc how the initial brief for the chandelier arrived when he received a commission from restaurant owner Jean Paul Bucher, to convert an old textile warehouse in Barcelona into a restaurant – the Brasserie FLO.

“I was in charge of the overall design of the restaurant and our relationship was a positive experience from the outset,” Moragas tells darc. “He was very open to my proposals, apart from the lighting initially. My design included a series of white glass globes to which Bucher said: ‘Monsieur Moragas: pas de boules’ (Mr Moragas, no balls). And so, he provided the solution – ‘create the lighting yourself.’ That was how the Vaghe Stelle came to be.”

Inspired both by medieval architecture and the designs of Viennese Secessionists Joseph Maria Olbrich and Adolf Loos, Vaghe Stelle also has literary roots, taking its name from Giacomo Leopardi’s poem Le Ricordanze, which refers to the Vaghe stelle dell’Orsa (the vague stars of the Big Dipper).

Commenting on the reinvention of the Vaghe Stelle for today’s market, Santa & Cole’s Nina Maso tells darc: “We had to adapt the fixture to the requirements of new markets and one of the main challenges was to simplify the lamp assembly and installation process. It is a simple design that boils down to the essentials – this is what makes it a timeless piece.”

Maso strongly believes that a designer is the guardian of the vision of their work and as such, when it came to bringing this fixture back to life Moragas worked closely with the Santa and Cole team to ensure Vaghe Stelle was released according to his vision and specifications.

“A designer should always create products that are not too prescriptive and can live well in a variety of settings,” says Moragas. “Vaghe Stelle was never designed to be fashionable.”

And because of this, the chandelier is still suited to the same kind of projects it was initially intended – whether it’s a lobby of some kind, restaurants or public spaces – even homes, thanks to its warmth that can create a very welcoming ambience.

“The Vaghe Stelle light was first made in the 1980s and back then it was a practically unknown design,” adds Maso. “Part of our work at Santa & Cole is to rediscover and recover historical designs to put them back on the market. The reason why Vaghe Stelle is in our 2016 catalogue is because we believe that new generations will understand and appreciate this magnificent design. We want to give it a second life.”

“Santa & Cole has a catalogue of design ‘classics’ and I am delighted my light has been added,” continues Moragas. “It’s a huge honour and I hope it reflects how I approach all of my work in design and in architecture. Things should stand the test of time and it would never occur to me to have one ‘signature design’. I design with the aim of answering a question that I put to myself with each different brief that I take on.

“Light in my projects plays the same role as colour… It is the only thing that can be drawn. I would say my use of light is cinematic.

“Today the world is a democratic place.There are more people, more ideas are shared and there is greater awareness about design. The re-edition of Vaghe Stelle is an example of that.”