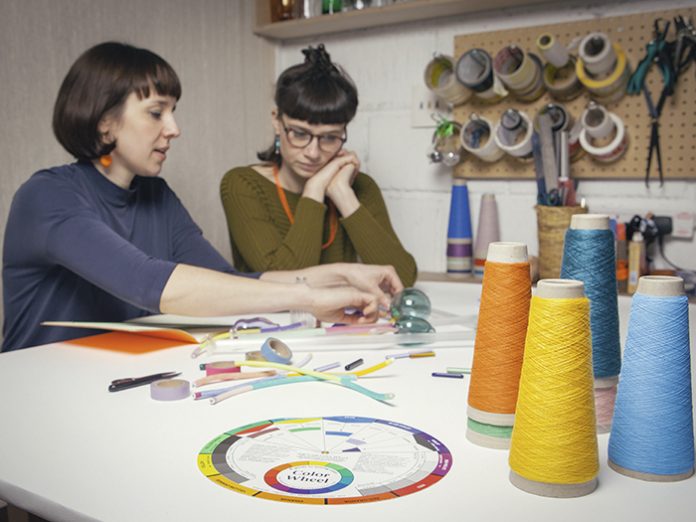 Although from somewhat different backgrounds, both Sarah Colson and Aimee Betts are ambitious, colourful designers who have built up their talent with drive from an early age. Now based in South East London, they identify with the creativity of young designers swirling round this part of London.

Colson, originally from Wiltshire, UK, studied BA Interdisciplinary Textile Design at the University of Western England before working on a yacht to save money for her Masters in Product Design at the Royal College of Art (RCA), which is where she met Betts. At the RCA, Colson saw people turn creative processes into commercial businesses, inspiring her to earn a living out of making the market understand how she wanted to use her creativity. Then working freelance on more conceptual designs, performance pieces and community-based work, Colson undertook a design residency for the British Council in Indonesia where she made a small light installation as a community project. She went on to set up her own lighting company, establishing a more commercial edge to her work.

“It was never intended to be a lighting company. I just wanted to be a designer really,” says Colson. “Creativity is at the heart of everything I do and lighting is a nice platform as it means I can be quite sculptural and decorative with the way I work.”

Betts grew up in Leicestershire, UK, on an aquatic nursery, and her designs have very much been shaped by her rural, hands-on upbringing. After studying an Art Foundation at the University of Loughborough, Betts went on to study BA Multimedia Textiles with an emphasis on the inventing process and handling materials such as plastic, wood, metals and papers. In a desire to further develop her skill set with more traditional textile techniques, the budding designer worked for a freelance embroidery company making samples for fashion.

“It was here that I learnt to dye fabric and really developed my love of colour,” explained Betts. “I really enjoyed the immediacy of dye and the access to colour.” She then went on to study a Mixed Media Programme at the RCA. Betts’ first experience working with light came through her work with design collective The New Craftsmen in London, where she worked with glass blower Michael Ruh on the Harbour collection, a series of pendants combing coloured light flex hand braided cord with coloured blown glass.

For both women, there are similar elements that attract them to lighting design. They each enjoy the drama it creates in a space by hanging something from the middle of it; Colson drew on memories of mobiles hanging from her bedroom ceiling as a child. She enjoys the problem solving aspect of lighting design – working out how to create a beautiful product despite being bound by the essential components of a lamp. “I also really enjoy the fact that it’s almost sculptural because when the light’s not on, you have a really beautiful object,” she says. “But when the light is on, the light gives it a purpose and an intention to be in the world.”

Betts likes to work with her background in textiles, thinking about how she can bring her understanding of layer, opacity, colour, texture and depth to lighting through her own skillset. Having worked a great deal with flat textiles, she too enjoys the sculptural aspect of decorative lighting: “You can move around it and see it from different angles,” she says. “It really adds duality to the room.”

After meeting at the RCA, the pair went their separate ways. During this time, Colson worked in Brazil with designer Marcelo Rosenbaum on his A Gentre Transforma project to develop the notion of collective design, and Betts, as well as working with Ruh, undertook a design residency in India working with locals to produce embroidery collections. Years later, they bumped into each other at an art gallery, rich with experience and ideas. “I liked what Aimee had been doing with Michael Ruh, and I was wearing one of my bags that I’d made when we ran into each other,” explained Colson. “Aimee asked me if I wanted any cables for my bags. I said not for my bags but I’d love some made for my lights!” Their collaboration grew from there.

With Maison et Objet Paris coming up in January, Colson had been experimenting with new coloured glass parts but had reached a point in her design process where she wanted another influence. At the same time, Betts had been following Colson’s work and thought to herself, “I need to make some cord for Sarah’s lights!” With this mutual appreciation, their skill sets naturally came together. Through experimentation in lampshades and working with colour, they pulled together a trio of samples and considered how they could best work to complement the glass using blocked and striped coloured affects. “I would come over to Aimee’s once every three weeks or so,” explained Colson, “and Aimee would have done some more samples for us to take a look at in different colours. It was great to land on someone that I could work with so easily.”

With Betts’ vast understanding of colour, she was able to teach Colson in depth, using the colour wheel, why certain colours work together and how they interact with light. Together they explored how pastel colours can be used to create contrast. “Using the colour wheel as a tool, we could step either side of colours and look at things that were a little offbeat, so the colours don’t exactly complement each other but are just a bit to the side,” said Betts. “If colours go together there’s usually a scientific reason for it, so colour is generated by that process.”

For both designers, there were three main ingredients for the Clara Lux collection; colour, form and texture. These factors drive each of their individual practices and are what they attribute their collaborative success to. Making the pieces slightly asymmetric, Clara Lux plays with the viewer’s perspective in how the eye moves around the different shapes of the glass. “It’s a trio of light and a will to acknowledge that they work together as a collection and individually,” said Betts. “The different colours appeal to different people so hopefully they’re flexible in that sense as well.”

The two share an understanding of collaborative projects that is integral to the Clara Lux collection. Colson made her first lighting project from her bedroom, which was her studio at the time. It was produced as a result of using the creative process as a kind of therapy towards happiness. She made something that was basically just a fabric, then started to look to friends and various sorts of crafts people to see how she could make it into an actual product. “This was a bit of a eureka moment for me, that I could come out of my bedroom and start interacting with the real world. I started experimenting and it all grew from there,” she says. “I started getting more and more recognition and I learned that my ideas grew every time I gained a bit of confidence, and connecting with people was a really big part of that.”

Also preferring to work in collaborations, Betts doesn’t have many of her own products as she sees an intriguing new set of problems to solve with each collaboration she is part of. “I think in the West we’re very much taught to think of ourselves as individuals, whereas the East has more of a focus on community. I think the future is more about networks and collaborations and I try to work with a more Eastern philosophy.”

Colson also added the value she places on dialogue when working with other people, “You might have designed something and someone could just turn around and tell you they don’t like it. So you’re getting feedback all the time at every stage.”

In this vast network of shared ideas, the two young designers don’t pay much attention to trends but rather to the wealth of inspiration they are surrounded by. For both, the biggest inspiration would be to move into an unfurnished flat and then look to the market and see what they want, what they can afford, thereby instinctively acknowledging a gap in the market. If they can’t find or can’t afford what they want, they make it. Betts put simply that it comes down to a need and, and as Colson so aptly added, the need results in the greater good of the design.