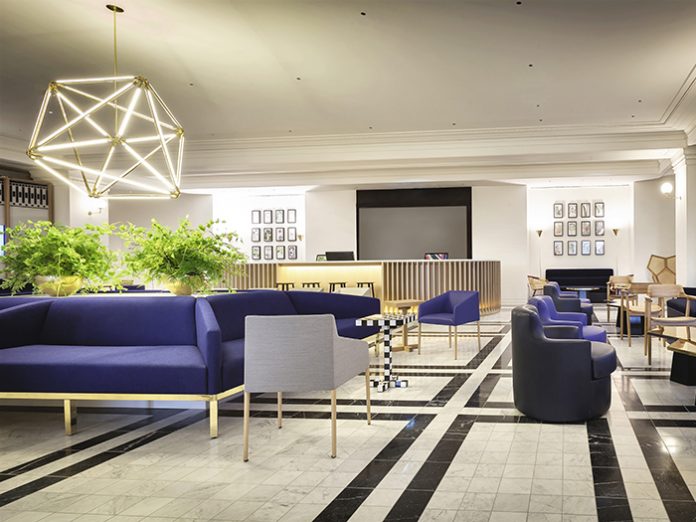 The Selfridges International Tax Lounge in London brings luxurious surroundings to its customers through detailed design.

Providing an ambience similar to that of a business lounge at an airport, the new International Tax Lounge at Selfridges, London, is the first of its kind in the UK. London-based lighting design consultancy Illuminationworks collaborated closely with Waldo Works, architect and interior designer for the scheme, to create lighting that brings a hotel-style environment and service to the heart of one of London’s most iconic stores. Tripling in size from its previous tax service reception, the new areas within the International Tax Lounge provide comfort, luxury and relaxation enabling transactions to be undertaken privately and at leisure.

Illuminationworks’ Managing Director Chad Rains commented on the collaboration: “We’ve worked with Waldo Works on many projects over the years going back to 2001. We hadn’t worked with Selfridges since the Selfridges Hotel renovation project in 2008, which was put on permanent hold due to the financial crisis. The Waldo Works invitation to work on the lounge was a reintroduction to Selfridges that has continued to this day on several other retail projects.”

In the early 1900s when Selfridges opened, the era was marked by a golden age of travel and a growing opulence that influenced the way public and private buildings were designed. During this time, Selfridges opened its Palm Court restaurant, an eatery famously known for its vibrant, tropical décor.

“The lounge was inspired by that era, by a desire to bring back the Palm Court and golden age of travel with glass tunnels and palm trees,” said Rains.

From the very beginning, the project was about giving international customers, who form a very large part of total revenue for the brand, a lounge space within the department store. “The new space triples in size from the previous tax lounge, which resembled where your GP’s office meets the bus station,” commented Rains. With a range of facilities for overseas clients, the new 16,000sqft facility includes a main reception and waiting hall, as well as two banking halls, two libraries, a VIP area, café and quiet room. The scheme also includes a faith room, which is one of the first within a UK department store.

The central focus of the main waiting hall is Bec Brittan’s Shy pendant, which immediately draws attention to the lighting scheme that continues to stun throughout. Forming a key feature of the two spacious Banking Halls are bespoke globe light fittings manufactured by Nocturne in pendant, wall and table versions; these numbered glass globes hung from, or supported by, brass rails act as a vital element of the way-finding strategy. “Each globe is individually controlled to slowly flash when a customer’s number is called leading them to a particular tax desk,” explained Rains. “When you come into the reception area, you’re handed a ticket and you wait for it to appear on the screen. When it does, you follow the flashing light to that numbered desk. This non-verbal communication was crucial to the success of a space where transactions are carried out between individuals who rarely speak the same language.”

In a number of areas, including the VIP rooms and café, the architects have referenced a domestic setting with Vaughan’s Carcassone floor lamps and the Periscope Ball pendant by Areti selected to enhance a comfortable atmosphere. Within the faith room, Illuminationworks installed a sun-like circular fitting, Flos’ USO 900 Cove, set within a recess in the curved wall. This central feature of the faith room is surrounded by Chimera Controls’ LED tape outlining the curve of the ceiling, which also feature elsewhere in the facility. The cooler light source of the sun, compared with the surrounding downlights, creates a calming focus to the room.

To control the ambience of each of these spaces, a dimming system was installed to alter the mood of the spaces throughout the day into the evening, balancing the artificial light with the increased levels of natural light, which was an important aspect of the brief. To achieve this, Lucent’s Prospex downlights used throughout the scheme feature LED dim to warm technology that mimics the dimming effect of halogen or incandescent sources, combining energy efficient technology with the mood-enhancing quality of traditional light sources. “This is the first project in which we’ve used the dim to warm technology and we’re excited about its potential as energy efficiency becomes ever more important.”

Despite being in a department store, Selfridges International Tax Lounge is essentially a hospitality project with soft, relaxing lighting that envelops the guest. “Downlights are carefully located over tables and in circulation areas but never over seating,” said Rains. Lighting is integrated only where possible and necessary, such as with new furniture pieces like the VIP Lounge banquette complemented by Vaughan’s Bolzano table lamps, and in the waiting hall where Azucena’s Imbuto Torchere free standing luminaires stand either side of a couch, offering a domestic illumination for the waiting space. “This less slick approach helps to reinforce the timeless quality the client was seeking,” said Rains.

With an expert focus on discretion within retail and hospitality sectors, Illuminationworks’ scheme within the Selfridges’ tax lounge enables customers to have their tax-free paper work completed before going to the airport. “It is quite a specific function! We’ve never done anything like it. Light levels were very different from our hotel projects, and retailers are not used to the lower light levels of hospitality work. You can’t step directly from brightly lit linens into a moody lounge space. Where our instinct is to go dark and atmospheric, this space still had to fit with the character of the department store.”

Illuminationworks’ experience with retail, hospitality and high-end residential work was undoubtedly a benefit as this project brings together all three. Rains commented on the successful integration of the scheme: “It has been exciting to work on a project that is a first, and to hear that other stores are now looking at implementing similar areas is a compliment to the client as well as the entire design team. Our approach was to follow the aspirations of Waldo Works and to create a lighting scheme that helped provide the ‘cool luxury’ Selfridges wanted.”

Despite the challenge of ensuring that the demands of the area and its location tied together in a coherent way, the increasing popularity of these spaces being used for events and parties is a testament to its success. As a result, Illuminationworks is working on other projects for Selfridges in London, Manchester and Birmingham, and if the International Tax Lounge is anything to go by, they will be an enticing blend of domestic comfort in its highest form of luxury.