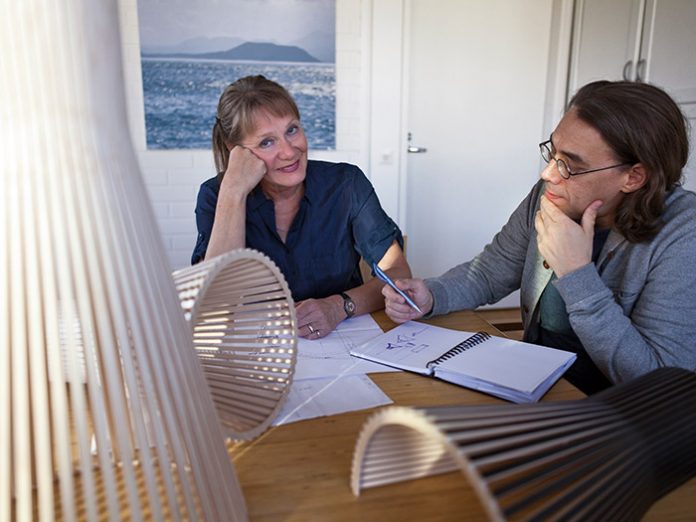 Secto Design’s founder, Tuula Jusélius met Finnish architect and lighting designer, Seppo Koho in 1995. Having bonded over their shared interest in northern wood and Scandinavian design the two became fast friends eventually collaborating on a business that would later become the basis of their present company and backbone of its lighting collection.

Secto Design’s first iteration focused on innovative wooden furniture, which sold well but clients complained about the lack of lighting accessories to complement it. Taking this on board Jusélius looked to the birch tree for inspiration and it’s place in Finland’s history.

After the last glacial period in the northern hemisphere birch trees were the first to dominate the landscape thanks to their remarkable tolerance to challenging conditions. Indigenous people across the northern latitudes referred to the tree as the guardian of the people using the wood to make shelters, utensils and even remedies, so this felt like a good fit for a company whose foundation is built on a deep respect for nature and professional woodworking.

The conical Secto 4200 pendant was the first light the company made, acting as a blueprint for future collections even today the wooden shades of the Secto Design fixtures are handmade in the town of Heinola, central Finland.

Producing lights outside of Finland has never been an option for Jusélius; “About 70% of Finland is covered by forests so I guess it isn’t really a big surprise that we have such skilled woodworkers,” she says. “Wood is a material that has a life of its own according to its surrounding conditions, it takes a lot of skill and patience to manufacture a Secto light and get a flawless result, they may look very easy to make with their simple lines but the reality is quite contrary. If it hadn’t been for the innovativeness of the Finnish cabinet makers it would have been impossible to start manufacturing these lights to a large audience without compromising the artisanal touch. On each lamp you can find the initials of the person who made it. It’s like a signature on a painting and credits our talented artisans.”

Jusélius was the first to bring birch lights to the high-end design market; the innovative use of the wood was warmly welcomed along with Secto’s sustainable approach to design. All Secto Design shades are made of PEFC certified, top-quality Finnish birch veneer that are form pressed into blanks, which are cut into slats, then sanded and connected using rings of aircraft plywood; the slats are then glued and nailed to the rings. The lights were initially designed for energy saving lamps but today use the best possible low-energy LEDs.

Recycling and sorting are also important stages throughout the manufacturing process. Unfortunately Secto’s success has also attracted some unwanted admiration in the form of cheap replicas. The phenomenon of replicas is now an unpleasant reality for Secto with the company coming across new copies every week. “With the issue of counterfeit products there are still many concerns regarding social consciousness,” says Jusélius. “The ugly truth behind a copied product and how pirated products impact society in terms of discrimination, health and poverty is seldom recognised.”

It’s not always easy to tell the fake from the original, especially if the proportions are close to the original and often the material choices and details of the copied products are similar as well, which causes even more confusion. This is why Secto have decided to add a special tag on its products, as a proof of it’s authenticity. This tag is a hologram sticker that has been created just for Secto products by Starcke. Once the authentic design lamp leaves the hands of the maker in Finland, a 20×10 sized hologram security seal is added to the shade. It’s a tamper evident seal, that shows the product has been made in Finland, of top-quality birch material, by a talented local carpenter, in a fair work environment, and that the electrical components are approved and safe to use. The hologram has a picture of the Secto pendant visible to the eye, as well as more detailed information hidden in the layers. If removed, it will break. Thus the same hologram sticker can only be used once, on the original product.

“We stand behind the intellectual property rights of our lamps and put a lot of time and money into the battle against piracy,” continues Jusélius. “Respecting nature, artisans and the environment affects many choices we make on a daily basis. For a company it is easier not to divert from those choices when they are an integral part of our core values.”