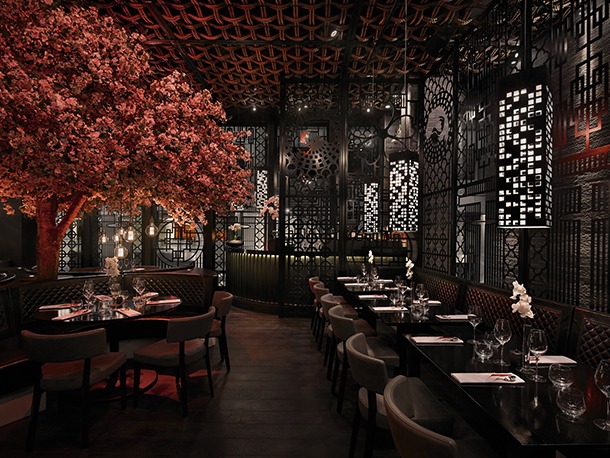 Tattu is a contemporary Chinese restaurant and a thriving addition to the fashionable Spinningfields area of Manchester. Inspired by the strong conceptual restaurants found on America’s West Coast – and the vision of Tattu Managing Director Adam Jones, in partnership with his brother Drew – the interior takes customers on a visual journey drawing decorative influence from different styles of body art.

UK-based Tyson Lighting was chosen to light the distinctive venue, having designed and manufactured all products featured in the restaurant, with Product Design Engineer Henry Opara overseeing supply and fabrication of the bespoke and technical lighting. Opara, an up-and-coming talent in the lighting industry, has overseen a number of innovative and exciting light projects in the UK with particular focus in the North West, including Sakana Restaurant, Manchester and The Art School Restaurant, Liverpool.

Opara explained the fitting of the installation for which Tyson was on site with its specialist knowledge of the conceptual products: “Because many of the items were unique, the contractors required assistance with some of the more complex fittings. For example, with the anchors being so bespoke right down to the way the rope had to be tied, I was personally responsible for creating the knots, which could only be done on site, to give them the authentic look required. This needed an element of artistic license to dress them and achieve the original styles envisioned by the client and architect.”

Tyson’s Managing Director, Andrew Gibson, commented further on the complexity of the project in all its determined designs from the Jones brothers: “The clients, Adam and Drew, both had ambitious plans for the look and feel of Tattu. Initial discussions included talk of suspended anchors, woven rope lighting and bespoke chandeliers featuring glass skulls encased in cast iron spheres. We were responsible for bringing some very radical pieces of lighting to life so from a design point of view we set about prototyping the fittings which could potentially give us the most headaches.”

The brief was that the interior needed to have a low level of ambient light but be cleverly lit to highlight key aspects and design pieces within the building and capture the essence of Tattu. The main colour scheme blends rich earthy tones with sumptuous blacks and golds, so Tyson was instructed to use lighting that would provide a tapestry of light against these surfaces.

For general use areas, narrow beam spotlights were used to retain the dark appearance of the venue, whilst providing adequate light. Gibson explained: “We fitted many of the products with halogen lamps to provide a flame-like appearance. However, with the building falling under new energy consumption compliance regulations, the use of LEDs was compulsory. To match the light to the halogens, we used specialist Soraa lamps which use colour-changing filters to alter the colour temperature of each lamp as required.”

The majority of the lighting products used on the scheme are completely original concepts, with Tyson utilising Solidworks software and 3D printing technology to build the prototypes. With the added benefit of being able to produce lighting schematics, Tyson was able to generate the wiring drawings and assist with establishing the dimming zones which played a major factor in achieving the client’s and architect’s vision for the project.

The rope ceiling, a special feature in itself, required lighting that highlighted its presence but didn’t create too much ambient light to impact on other features such as the illumination of the blossom tree that stands as the centre piece on the restaurant’s first floor along with the skyscraper pendants. Tyson used high-level track mounted spotlights facing upward to flood light onto the ceiling. Spotlights are positioned on the same track to wash down the walls and highlight the textures of the wall panels.

As you would expect, with so many customised elements, the project didn’t come without its challenges, as Gibson explained: “During initial talks regarding design concepts, one of the ideas was to have a winch fitted to the mezzanine bridge. Unfortunately the ideal mounting positions of the anchors and location of the bridge became somewhat of a stumbling block. As a compromise and, in fact, a wiser use of space, the anchors have been mounted on rise and fall units behind the rope ceiling which still allows them to be moved up and down on demand.”

Jones commented further on Tyson’s involvement in the project: “Tyson Lighting was the first choice for the restaurant due to the firm’s previous history of high-profile projects in the region. Tyson’s ability to take design concepts, no matter how radical, and turn them into eye-catching pieces, coupled with the company’s experience, has enabled the creation of stunning lighting fixtures for Tattu.”
As a complete lighting scheme, the external view into the building was designed to provide a visual feast for passers-by.

The combination of the skyscraper pendants against the backdrop of the coloured blossom tree create a sense of drama and intrigue, while the two suspended anchors add to the theatre of the interior and help balance the overall lighting scheme within. Tyson’s distinctive character is seen in every aspect of this restaurant’s surreptitious profile, standing as a point of pride for bold creativity and signature design in the North West.