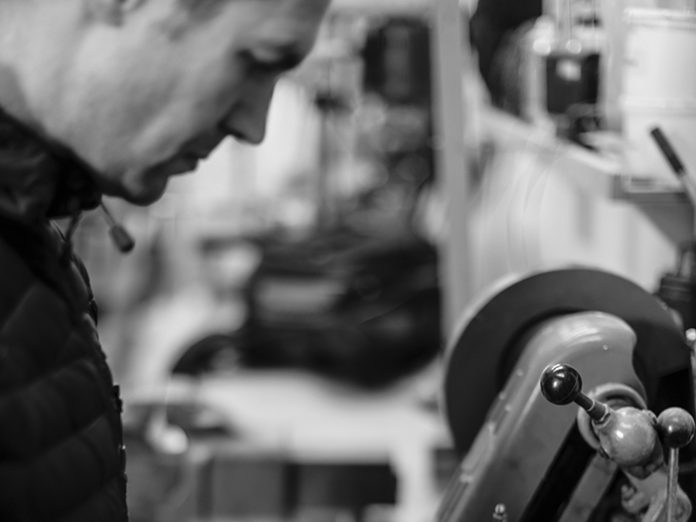 Nebula is a range of kinetic lighting sculptures from British artist Ivan Black. Helen Fletcher takes a closer look at the man behind the design and why the tranquil Welsh countryside has a lot to answer for.

INK is a new British design studio bringing together art, design and technology to create interactive kinetic lights. Launching with its Nebula range, consisting of the Orb, Ellipse and Ellipsoid, conceived to work in concert or individually, the lights are evocative of distant celestial bodies and in their spiralling motion reminiscent of the DNA helix.

Designed by renowned kinetic artist and INK co-founder Ivan Black, the Nebula lights have evolved from the mathematically inspired sculptures that Black has been creating over the last two decades. These are at the forefront of the ‘connected home’ movement – their patterns of rotation and luminosity controllable through a proprietary iOS app and integrated motor system.

But what of the man behind the design – what does he hope for in his latest collection and where does his story begin?

Born in London in 1972, Black has always been surrounded by artistry and creativity, with his mother also an artist and his father a dealer in Persian carpets. Surrounded by beautiful antiques, his creative flair surfaced at an early age and Black made his first sculpture at around the age of fifteen; going on to hold his first exhibition at the tender age of seventeen in a café in Portobello.

Speaking with darc ahead of the official Nebula launch in London, Black reflects on this time in his life: “I sold a bunch of stuff and one of my friends told me it was beginner’s luck! It sounds a bit cruel but I think he was just trying to build up a bit of grounding in me because the art world is a hard one to make any headway in… But it was all I wanted to do. I was making more and more sculptures at school and went on to do a foundation course at Middlesex Polytechnic, one of the best foundation courses in the country at the time. I didn’t have any other interests that gave me as much pleasure as art did, it’s as if it’s inbuilt in me and I was determined that art would be a career and not just a hobby.”

While Black describes his time doing the foundation course as a “fantastic experience”, meeting some great people and learning a lot, he tells darc how he wasn’t quite as well suited to the educational system as most: “I was always arguing with the teachers and was very idiosyncratic – always wanting to do my own thing and that wasn’t always the popular choice with others! During the course I felt as though I was being pushed towards the business side of art and being more conceptual – having to justify everything that I was doing and working within acceptable parameters. I just wanted to do work I felt like doing at the time and didn’t want to be constricted.”

Having made the decision to travel around India and Thailand rather than head to university following his foundation course, this was an opportunity for Black to build on his artistic skills: “It was an incredibly informative experience,” he says. “There were no mobile phones or internet in those days and it really was like going to another planet! Whenever we found ourselves among people who were making things we would always get involved – we did some stone carving in India in fact.”

An inherent problem solver, who confesses to picking up new skills rather easily, Black continued to amass multi disciplinary skills on his return to the UK, working with his father, David Black, restoring Persian rugs. “It is a very exacting and difficult trade but I found it fascinating,” he says. “It’s back breaking work hunched over a carpet all day long and when I look back at my time doing this now, I can kind of see my initiation and fascination with craft and repetition.

“You look back on your past and you see these moments where you perhaps had formative experiences… working with Persian rugs was definitely one of them.”

Black continued to work hard at building his skill set, completing an apprenticeship as a carpenter – a job he held for eight years, before meeting his wife and making the life changing decision to move away from the chaos of London and head to the serene surroundings of the Welsh countryside.

Once in Wales, liberated from the need to work – thanks to a very successful ‘final exhibition’ held in London – Black found himself in one of the most creative periods of his life, and for three months the ideas spilled out, he was making something new almost every day.

“I’d go to bed with an idea and wake up the next day to make it,” he says. This, is where the story of Nebula begins…

Motion had by this time, become central to Black’s work, adding another layer of complexity and interest to his experiments. Using his unique methodology to create forms that mutate upon the introduction of energy, the repetition of identical elements is a recurrent theme in Black’s work and as such, he builds complex fluid structures. Each work is a section of a potentially continuous sequence, generated in form by the application of systematic rules to his geometry.

“I’d always been interested in making mobiles,” Black tells darc. “There are very few dominant figures in the world of mobiles and their work is endlessly copied and recycled. Every time I see another Alexander Calder knock off I feel it’s a shame people aren’t driven to try and find their own angle.

“I loved making mobiles but I’d only ever made small numbers of them; it’s difficult to get away from Calder’s legacy, he’s really cornered the market and while I was developing my ideas it felt as though there was almost nothing he hadn’t done. It was difficult – even if you think you’re coming up with an original, you then end up seeing something that he’s done that is similar.”

However, Black managed just that when he started exploring the spiralling patterns, which have become a hallmark of much of his work.

“It was one of those things – I thought to myself, it’s so simple it can’t be original – someone else must have thought of this because there’s nothing to it…But at the same time, it was so interesting and was creating something amazing.”

Black thus spent several years developing and evolving his signature style, with his work being bought by collectors and public bodies around the world. It was the realisation that the introduction of light would add another dimension to his work, but also create sculptures that were as functional as they were beautiful, that led to the creation of the Nebula range.

“It’s the spine of the sculptures and its interaction with the forces of inertia, gravity and momentum that is the key to the changes in shape. A chain of connected, off-set vertebrae rotate in series and deliver the transformation between the sculptures’ spiralling patterns and its celestial static form.

“But it is the light that enhances and accentuates the aspect of the sculpture that I find most interesting, which is the movement and alignment of the parts. With the addition of lighting, the structures disappear and all you see is spirals of light. In the dark it creates a continuous line – a trail of beads almost.”

Whilst the addition of light had originally been an experiment it soon became clear that it would open up many more possibilities. “Not every room needs a sculpture but every room needs light,” says Black. “Why not make that light a work of art? I realised no-one else in the world of lighting was exploring movement in a major way, so I concluded I was on to something unique.

“It was initially a real learning curve working with light, but I was fortunate to have some fantastic craftsmen and engineers to support me through the process. I always want to make sure the skills we have in Pembrokeshire are put to good use. This is at the heart of how I want to work.”

Interaction with the light sculptures is also a major part of their appeal for Black and  being able to directly control the movement of the lights creates much greater engagement. They are not distant and untouchable like a museum piece, you can manipulate and play with their form – thus getting a much more connected experience.

As such, Black initially developed a smartphone app to enable the speed, pattern and direction of rotation to be played with, but has since taken this a step further, introducing a gesture-control system that allows the movement of the sculpture to be dictated by hand or arm movements – you can literally conduct the light with your body. This all serves to create an experience, not just a piece to look at or illuminate a room.

Talking inspiration and influences, Black sees his work as more of a progression and conversation with himself, always looking to see where he can take his sculptures next. “If you look at my work chronologically you can see it evolving into different areas. I was quite deliberate about developing my own style. I decided to concentrate on kinetic work because I wanted it to be very much my own, I wanted to create an identity for the work I was doing – I wanted something recognisable.”

“There are other kinetic artists out there that I admire but rather than be inspired by them, I’ve always seen their work as directions I can’t go with my own… it’s almost like an anti-inspiration in some ways, it can be very frustrating at times!”

For INK, Nebula is just the beginning and there are already plans to reinterpret many of Black’s existing designs with the addition of light. Now at the beginning of a commercial journey with the three Nebula designs, looking ahead, Black is interested to see where the sculptures will naturally fit and what opportunities might lie ahead: “I can see the lights working in lots of different environments – they’re very classical and simple and I can’t see them clashing with much. I’ve seen them in modern settings and more elaborate settings and the juxtaposition works rather well.

I think we’ve found a niche in the market, that’s for sure.”

@archiproducts_awards winners have been announced!