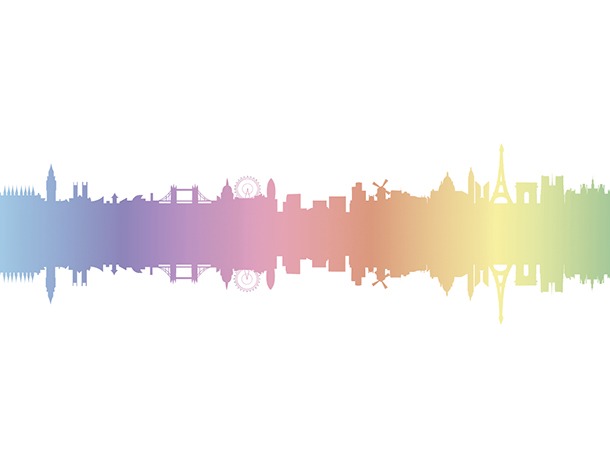 Lucio Longoni, lighting buyer for London’s iconic Heal’s store, begins our coverage of London and Paris, with his professional perspective on the international festival scene and favourite encounters from the London shows.

As a lighting buyer, international design festivals are hugely important. Most brands will save their major launches for events like Euroluce in Milan and Maison et Objet in Paris, taking on vast stands and going to great lengths to impress the visitors who come from all over the world to take part. As one of those visitors, it’s fantastic. You can feed off what everybody’s doing and it really helps you to assess trends, not just based on what you see, but also the conversations you have on stands and at parties; talking to people and finding out what they’re doing next.

In terms of current trends, I think it’s safe to say that copper continues to be important. It’s been around for a long time now – Tom Dixon started it – but I think lighting trends, unlike many homewares, have a much slower cycle. Copper is reaching its peak now and there are still loads of really amazing, new, up-and-coming designers who are finding it a really beautiful material, wanting to play with it and using it in new designs. It also feeds into, and complements, the ‘industrial’ look. Brass, filament bulbs or anything with an industrial or vintage look is key right now. Pastels were around in 2012, but again, we saw even more this year – especially in lighting – and I think that will carry on through the next twelve months.

At Heal’s we see ourselves at the forefront of these trends, so we have many collections that are new to market, whether it’s new designs or new collaborations, often doing them in a beautiful, capsule way right at the start of the trend and then bringing in more commercial pieces as it peaks. When it comes to shows, Euroluce every two years is of course the main event internationally, and at Maison et Objet there are some nice things to be found – more so in January than September – but for Heal’s as a UK store, London Design Festival is particularly important.

The Festival was non-stop for us this year. We held a big party to mark the re-launch of our lighting department on the Wednesday evening, but either side of that, I just went to as many shows and events as possible. It’s exhausting, but hugely valuable; Heal’s is a British design company and although international brands have played an important role throughout our history (hosting Italian and Scandinavian Design Festivals in the 1950s and holding in-store events to mark the first-to-market UK launches for many international designers), the thing that’s always run through the collection at Heal’s is ‘British Designed and Made’.

Tent was particularly fruitful for new talent: people that had just set up their own business with husbands or wives; recent graduates on their own; or two brothers collaborating; I met a lot of people from different situations who just wanted to have a go and really get involved in design and start their own business. I think Tent and Designjunction were the perfect places to do that – and that’s certainly what we were looking for at Heal’s – or what I was looking for in lighting. It was good, again, to see the trends – because in a London festival, you’re more likely to see the trends that are going to appeal to the English market.
There were a few brands in particular that stood out this year. International Studio and Dyke and Dean were amongst my favourites at Designjunction. They’ll both be coming to Heal’s in January as exclusives for six months. We’re going to replicate the pick-and-mix assortments of both brands in our lighting departments. I think that aspect of mass personalisation is very important at the moment and will be for some time. The collections allow customers to put elements together and make it their own. People love having their own story element to buying a product, something they can tell friends or family about, or a talking point at dinner parties.

I’m a massive fan of Rothschild & Bickers, who were also at Designjunction. Their new lighting was fantastic and one of their new pieces, the Standing Pendant will be exclusive to Heal’s next year.

I saw a lot of interesting people at Tent, including Obe & Co, David Derksen and Alexandra Raben – a fantastic girl from Norway who had woven wool shades using big metal structures as their bases – very expensive, but amazing and very different. It was just one example of the many pieces coming through with that craft aspect, and in many ways I think those were some of the real highlights; just to know that people were getting involved with making, and weren’t afraid to go into making craft and still present it in a commercial and modern way.
Lucio Longoni, is Lighting Buyer for Heal’s. www.heals.co.uk

Click here for more on Heal’s new lighting department, including details of the new Bocci chandelier on the store’s historic Cecil Brewer staircase.