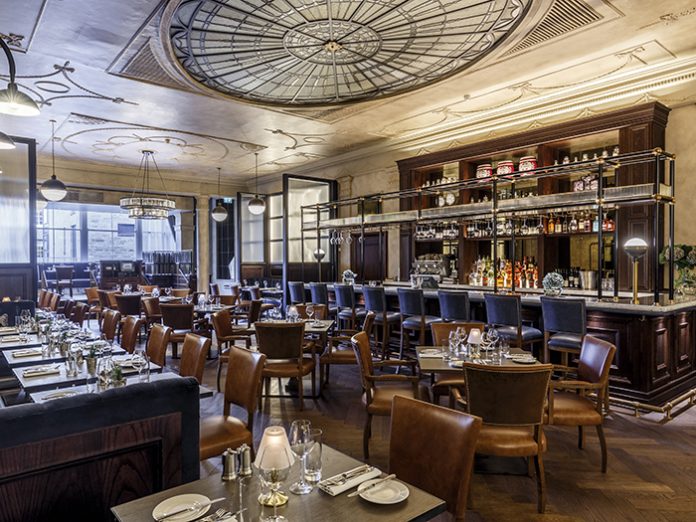 With two centuries of gracious living behind it, The George hotel in Edinburgh, Scotland received a luxurious refurbishment from UK interior architects Goddard Littlefair.

Hotel and hospitality designers Goddard Littlefair transformed The George Hotel in Edinburgh, Scotland, to create the new Printing Press Bar & Kitchen, as well as a new coffee shop, Burr & Co. With an urge to nurture the human response to the environments that guests find themselves in within The George Hotel, Goddard Littlefair focused on space, light and texture in creating many pieces of bespoke lighting and furniture for the hotel.

Following the acquisition of The George Hotel by hotel specialist investment group Starwood Capital, The Printing Press Bar & Kitchen is a 92-cover, 186sqm restaurant and a 116-cover, 207sqm bar, which flow into and adjoin one another in a fully flexible setting. It emanates a grill-brasserie feel with an authentic Scottish direction aimed at offering a culturally rich dining experience from new head chef Colin Fleming. Chef-restaurateur Des McDonald played a key role in developing the restaurant concept with Goddard Littlefair. The design team worked closely with McDonald, using his understanding of brands and restaurants to help develop the creative direction. Director of Goddard Littlefair Martin Goddard commented: “The Printing Press aims at residents of, and visitors to, the city of Edinburgh as well as at hotel guests, with maximum flow and adaptability throughout the day, so that bar guests can eat from the bar or restaurant menu for example, whilst Burr & Co offers soups and salads to attract lunchtime custom from passing trade and local office and shop workers.”

The overall footplate for the new restaurant and bar was as per the existing hospitality space in the hotel, whilst Burr & Co, separate from The Printing Press, inhabits a space formerly used for meetings. In a slightly different, more contemporary style, Burr & Co hosts a new timber shop front fascia, recreating one of the original Victorian-era shop fronts, designed by architects 3D Reid with branding by London-based Plus Agency.

The hotel itself is a category A listed building comprised of five townhouses, which meant treading carefully around existing surfaces and treatments. “Our overall approach was to be highly respectful to the building’s original fabric as well as to the late Victorian insertions, ensuring a feeling of restored grandeur,” explained Goddard. “We aimed to create an environment that instantly feels long-established, with a real sense of the building’s naturally imposing proportions and the highest-quality, authentic materials.” Goddard Littlefair Senior Interior Designer Stuart Wilson also worked on the project and described the overall style of the interior design as “industrial chic”, which required an effortless blend of industrial style into the Georgian fabric of the building.

Guests enter The Printing Press Bar & Kitchen either directly from the hotel or from the street’s listed revolving door entrance. The bar counter was removed from its former location at the front of the space where it tended to block and impede restaurant access at peak times, to a raised level to one side. The bar features bespoke oak joinery with black metal and brass gantries with inset light to set off the displays of glass and spirits.

Wilson discussed with darc the importance of the lighting scheme as a key feature in creating this blend that respects the building’s heritage while bringing it into the modern age. “The original building was the inspiration for the lighting really; the need for artificial light was quite important because we didn’t get a lot of natural light in the space,” he said. “So the industrial chic look was achieved by working with the form of the lighting. Nearly all of our lighting and furniture products are bespoke designs, and we always get involved in every part of the design process, working with lighting manufacturers to help make our design visions work.”

The design team strove to take the character of an industrial looking fitting, and then soften it. “For example the wall feature light on the mirrors in the restaurant – the materials used effortlessly suggest industrial but we added a turn in the arm which softens it, blending it with character to create a Georgian, traditional feel,” said Wilson. “Nothing too heavy or hard – we just played with the shape and angles of lighting and naturally allowed the bespoke lighting to develop with the style of the building.”

The building itself was not only a point of inspiration but also dictated where Goddard Littlefair could place the light fixtures. As a Category A listed building, Goddard Littlefair could only place lights where fittings already existed. This worked to their advantage in that existing support in the ceilings was already in place for the weight of the lights, however they were restricted at the same time in terms of where they could fit them.

Wilson discussed how they worked with these restrictions: “Luckily the placements of the two main pendants in the restaurant were in spaces where we could be flexible with our tables as they can be moved around and pushed together for different arrangements. There’s enough space around both central pendants underneath to centralise the long tables if needed to get that symmetry which we pride ourselves on. The regulations in how we could structure the lighting scheme was both flexible and restrictive in that it dictated where we could put our fixtures, but it meant we could be more creative with how the furniture worked around the lighting. We were then also able to be more flexible with the wall lighting, and make features using mirrors to reflect the light.”

The restaurant also features tall, ribbed glass screens with inset LED lighting designed again by Goddard Littlefair, that work to divide the dining spaces and give diners some privacy. “The idea developed from the concept of industrial screening that you see in old warehouses,” said Wilson. “We wanted to create a semi-private dining space to allow guests to feel comfortable and to divide up the space. Then we also have the screens that don’t have lighting inset which work with natural light in the day coming in from the big window in the back, creating some beautiful colours, shadows and shapes.”

Burr & Co, a separate venue from the Printing Press Bar & Kitchen, then takes on a slightly more contemporary aesthetic, while maintaining the Georgian aspect with modernised panelling and a fresh approach. “Right from the start, Burr & Co was to have its own identity,” said Wilson. “It had to work as an interactive space. In coffee shops, there are people running in to grab a quick coffee, people who want a bright space to meet friends, or just sit down on their own, so we had to make it work in all these dynamics.” Every single element is new in the converted and unlisted space, and follows a similar colour scheme to the Printing Press, while including more obviously contemporary elements such as a bespoke lighting display of ceramic pendants in varying sizes in the same blue-green colours as the ceramic tiling. A long bespoke oak refectory sits as a central feature underneath the centre piece lighting. Wilson continued: “We wanted to keep a contemporary feel to the design, adding little details to bring it into the 21st century. The lighting was developed from the idea of traditional glass decorative wall lights, and we just made simple adaptations like straightening the arms and using coloured glass, which instantly modernised the original take on the glass lamp shade.”

As a testament to the importance of light in interior design, Wilson spoke of their main challenge as being able to get the amount of light needed. “The lighting is the most important aspect of the design. We didn’t have much natural light to play with. We had to make sure there was the right balance between accent and direct lighting, which I think we achieved well in the end. We used a small amount of architectural lighting in our favour to dictate how we wanted to preserve the original beauty of the building and make it work in harmony with the decorative design.”

Goddard Littlefair has created a series of spaces that go above and beyond one era or one style. These spaces transport guests to a contemporary Georgian time that sits with ease in today’s world, where they can dine comfortably in style, whether they’re in a morning rush or settling down for the evening. “The best part about the whole thing,” said Wilson, “was seeing people using and understanding the space that we had created.” Surely that is the dream for interior designers, to see people choosing their space, for people to want to be surrounded by their vision. So with that in mind, The George is nothing short of the interior designer’s dream.