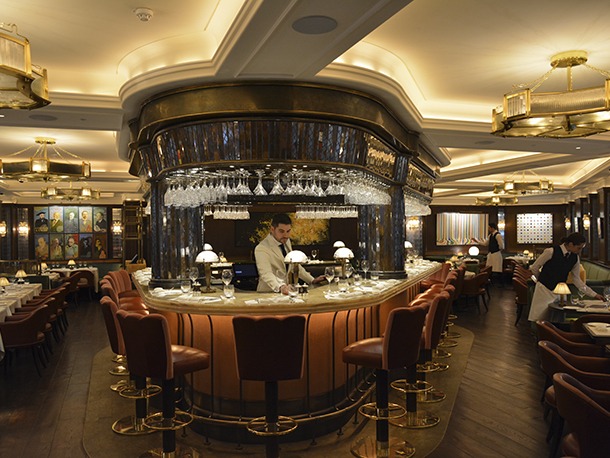 The Ivy has been a London icon for almost a century, first opening its doors to the public in 1917. Having started life as a tiny, unlicensed café in a narrow townhouse in Covent Garden, it took a decade before The Ivy became the most talked-about restaurant in London. It was at this time that the decision was made to pull it down and rebuild it, featuring brand new kitchens in the basement and private rooms on the first floor.

The Ivy remained obstinately full and fashionable for decades, but was eventually sold by Monsieur Abel to Wheelers, the famous British fish and seafood restaurant group in 1950. Following this, The Ivy changed hands quite a few times and by the late ‘80s, the once shining star of London had began to lose its lustre. Until 1990 that is, when architect MJ Long redesigned the restaurant’s interiors as part of a major transformation, alongside a number of notable British artists who were commissioned to create new artwork for the restaurant’s walls.

The Ivy was to stay this way until spring this year, when interior designer Martin Brudnizki and his team at Michael Brudnizki Design Studio were handed the task of propelling the restaurant into the 21st Century. With the original stained glass windows and a focus on the ‘Best of British’ guiding the design process, it was decided the bar would work as a centre piece to open up the rest of the space. Historically The Ivy had ‘best’ tables, however Brudnizki and his team didn’t want that sense of hierarchy and so now every table is the ‘best’. While The Ivy is now accessible to everyone, it still retains that perfect blend of anticipation and exclusivity.

Born in Stockholm, Brudnizki founded his internationally acclaimed interior architecture and design studio in 2000, with offices in London and New York. Primarily known for designing restaurants, private clubs and hotels, over the last decade his studio’s designs have been instrumental in redefining modern hospitality. Commenting on what appealed about The Ivy as a project, he tells darc: “The Ivy is an iconic London restaurant and the quintessential West End establishment; whether you’re off to the theatre or soaking up the atmosphere of Soho, The Ivy holds a special place within everyone’s heart. Everyone has been to The Ivy or has a story about it, so when the opportunity to reimagine this historic space arose, we couldn’t say no.

“We have worked closely with Caprice Holdings over a number of years and so the decision to work together was the culmination of a natural progression. The brief was quite simple; keep the feel and history of the old Ivy but bring it into the 21st Century.”

With this in mind, much of the new design pays homage to the old Ivy. As mentioned, the iconic harlequin stained glass windows remained and informed much of the colour palette in the restaurant; while the panelling was replaced with something slightly more contemporary and a focus on the ‘Best of British’ art now has a more suitable feel for 21st Century dining tastes.

Both the wall lights and impressive chandeliers featured in the space were designed by &Objects, a new product design studio founded by Brudnizki and long term friend and product designer Nicholas Jeanes. & Objects seeks to produce a range of pieces that marry functionality with aesthetics and so the design studio saw it fit that the new products be incorporated into the new Ivy. The fittings appear as though they’ve always been at The Ivy while retaining a contemporary sense of style.

“Lighting is arguably the most important part of a restaurant interior, it sets the mood and dictates the diners’ experience,” continues Brudnizki. “We wanted to create a seductive and glamorous ambience; the coffered ceiling is gently illuminated with bespoke antique brass as well as glass and mirrored chandeliers. On the tables, diners are able to chat over individual brass table lamps, complete with ruched silk shades. We wanted to hark back to The Ivy’s heyday and lighting was a crucial element to the success of the project.

“Much like the theatres nearby, The Ivy is made by its lighting,” concludes Brudnizki. “We’ve managed to create a sophisticated glow within the space, which mirrors the characters that frequent The Ivy.”