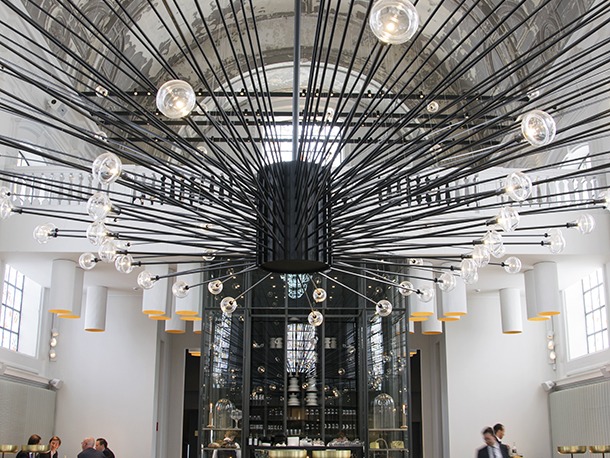 For those who hold the gastronomic arts in near religious regard, the location of new restaurant The Jane will seem pleasingly appropriate. The brainchild of Michelin Star chef Sergio Herman and his colleague Nick Bril, working in collaboration with design practice Piet Boon, The Jane occupies a former military hospital chapel in the Groen Kwartier of Antwerp, Belgium.

In keeping with the Piet Boon belief in authenticity, functionality and the use of materials that ‘age beautifully’, the chapel interior retains much of its pre-existing character. Only essential refurbishments were carried out, with much of its ‘crumbling’ aesthetic preserved and incorporated in to the finished look. Modern touches include a glass encased kitchen, a kind of culinary shrine standing in place of the altar; a series of modern-themed stained-glass windows by Studio Job; and a collection of bespoke light pieces by Beirut-based .PSLAB.

On entering, diners are greeted by a series of white corrugated, cylindrical, ceiling-mounted fixtures. Their glowing brass interiors deliver a rich warmth that contrasts with the surrounding white stonework and black decor. Similar touches are provided by brass table lamps that rise above the seating, and bubble-like, blown-glass wall fixtures.

The undoubted centrepiece of the restaurant is .PSLAB’s gigantic, 800kg chandelier, an explosion of blackened copper-plated steel rods radiating from a black cylindrical hub above the centre of the room. Each of the 150 rods is tipped by a hand blown, Czech glass bubble, illuminated by a 4.5W LED lamp. The chandelier has a maximum radius of 12m by 9m, with some rods finishing just 2.75m above the ground. In doing so, the piece takes on a much more intimate, human scale than its size would suggest, linking diners with the vaulted ceilings above.