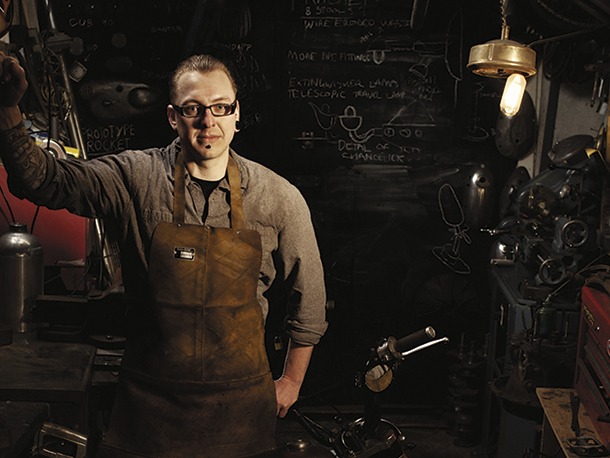 It takes a second to become accustomed to the scene that waits inside Paul Firbank’s Hackney workshop, a few moments to distinguish tools from materials; scrap components from works-in-progress. But then, as the brain adjusts, intriguing forms begin to pull in to focus: a wall lamp made from motorbike parts; a stool formed from a tractor seat – a host of furniture and fittings created from elements that once served a completely different purpose.
This is the home of The Rag & Bone Man, the company established by Firbank just one year ago as a brand for his unique range of reconstituted pieces. Much like the scrap he acquires on his regular trawl through the junk-yards and grease-shops of East London, the Rag & Bone Man moniker has been adopted and repurposed for a contemporary age. Whilst his 19th century predecessors merely bought and sold waste as raw materials for others to process, Firbank is very much a craftsman, embracing 21st century ideals of reuse and recycling to produce items that seem totally fresh, but at the same time have an antiqued, vintage quality.

The success of the pieces is largely down to Firbank’s ability to identify the innate beauty of quality engineering – found even in the most functional of parts. It’s a talent that suggests he has truly found his calling after a circuitous career path through an array of occupations – from tattoo artist to metal engineer and welder – eventually leading him back to his native Hackney where, in 2011, he set up the Rag & Bone Man alongside partner Lizzie Gossling.
“I started to make sculptures and lamps from found/scrap materials in my spare time,” explains Firbank. “The lamps would always generate most interest and lead to most of my sales and commissions so I decided to focus on these to see what their potential was. My first major show and launch was at Tent London 2011 where I had an overwhelming response and sold everything I had to exhibit in the first three days, giving me the confidence to go full time.”
The Rag & Bone Man returned to Tent this September after a hugely successful first year in business. On show were the workshop’s latest pieces, including a glorious chandelier, based around an old aeroplane rotary engine. Stripped down and thoroughly cleaned (using a local drive-through carwash, much to the bemusement of the garage attendants), this central body section is embellished with lamp heads created from old fire extinguisher shells. The chandelier is earmarked for the lobby of a new hotel development, the first of what Firbank hopes will become a series of commissions for large scale projects.

The engine’s second life, however, is spread further than an individual lighting fixture. As with many donor machines, different sections will eventually contribute to a variety of other works. The engine vent casing, for example, may become part of a chair, the back panel could end up as the surround for a wall clock. The continuous process of development means that the final nature of a piece will remain in flux until its completion, or until a perfect part can be found to complement a work in progress.

As word of his work spreads, Firbank’s search for materials has become ever easier, with members of the public contacting him directly to offer unusual bits of scrap. And over time, as his ability to mentally carve up existing machines in to new forms develops, the wealth of future possibilities looks ever more appealing.