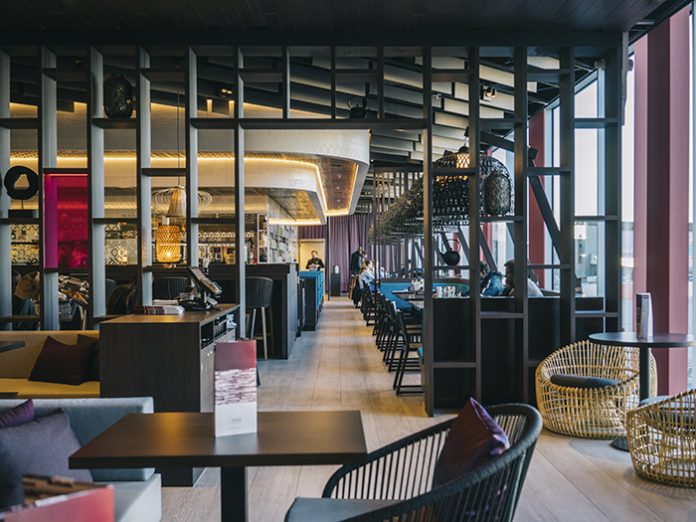 Schiphol airport in Amsterdam, The Netherlands, has a reputation for going above and beyond what passengers expect of a transport hub in organisation, flow, retail and culinary delights. Restaurants in airports don’t typically have a good reputation, but Schiphol offers something remarkable in Kebaya for customers to enjoy in solitude or share with their fellow travellers.

With a large and growing number of Asian travellers passing through Schiphol as a transit destination, or a gateway to Europe, Schiphol is competing to become the most preferred airport in the world. This was the core of Amsterdam-based design studio UXUS’ brief, as they pitched their idea to travel food and beverage provider HMS Host for an airport restaurant that was more akin to something one might find in a city centre.

UXUS Chief Creative Officer Oliver Michell told darc: “We were invited by the operators of the restaurant to pitch for Schiphol to create a new flagship focal restaurant in what is their new Holland Boulevard centrepiece, a connector between departure lounges two and three. This is an important corridor that connects two major international hubs within the airport, and caters to most of the transfer passengers going from one continent to another. With increasing numbers of Asian travellers, we knew from the start that it was catering for an international audience with an Asian focus.”

Further refined to that, Michell and lead designer on the project Wai Cheung worked with a food consultant to understand how the menu might come together. With the consultant based in Singapore, the focus naturally became South East Asia. “We came to understand that Singapore is very much a melting pot of Asian cuisine in South East Asia because of the cosmopolitan nature of the city and the openness to street food,” said Michell.

This concept is strongly reflected in the restaurant’s name, Kebaya, a traditional dress worn in South East Asia, mostly by Malays, Thais, and Vietnamese people. The layered garment is mostly worn by women, and although it is one type of garment, it takes on different characteristics depending on the country and culture wearing it. The fabrics and patterns tend to be different, but the overall structure of the way it is laid tends to stay the same.

Michell continued: “So with that, we really picked up on this idea that the restaurant wasn’t one platform, not just one Asian offering, but it brought together lots of different influences from different cultures. There are a lot of textiles in there but all underlined with this very clean environment.”

UXUS set out to create contrast by offering something unexpected to stumble across in an airport. “Schiphol is a great airport; it’s functional and the overall architecture is very clean, using materials such as concrete and glass. So we used warm materials, a lot of dark wood and copper, that really offset from what you would expect to see in the rest of the airport.”

This desire to create contrast was met with a need to emphasise the natural light of the space that floods in from the tarmac. In this light, UXUS designed with the idea of bringing indoor and outdoor together. “In Asia there are a lot of these indoor / outdoor spaces where you can enjoy street food and are sheltered from the sun and rain but still within the elements, so the whole space has the feel of being in a gazebo or pergola,” said Michell.

One of the main aspects to consider in designing this restaurant was understanding the flow of passengers coming through, and how people behave in airports.

Cheung told darc of the importance of creating somewhere for passengers who have time on their hands: “Most of the passengers travelling internationally will be there for about three hours on average, which is a long time, so you want to make it comfortable and give them something to enjoy. We created several different seating opportunities, at the bar, in the lounge and at the restaurant, or you can take away if you’re in a hurry, so it caters for everyone.”

Placed at an intersection, the restaurant can be approached from two different angles. Understanding this flow played a significant role in designing the layout of the restaurant, as UXUS decided to make a visible kitchen right in its centre. This presented challenges in deciding which parts of the kitchen they wanted on show, and what should be out of view from diners. “As an airport, Schiphol is particularly transparent, so preserving skylight was very important. We had to find the right balance between showcasing the exciting elements of the kitchen but hiding more mundane parts without obstructing the light,” said Cheung. “We also had to consider this in our choice of decorative lighting, as we didn’t want them to obstruct the skylight.”

Decorative lighting played a crucial role in Kebaya in creating atmosphere and defining spaces within the restaurant. “It’s one thing to have beautiful materials and use colours, but actually, the lighting is what creates the drama,” said Michell. “We made a point of the kitchen being quite bright as the chefs need functional lighting, and then we used Moooi’s Emporer fixtures elsewhere. As the space is so vast, these large pendants create a lantern-like effect, which we then accentuated with a series of canopies that go around the glass box of the kitchen with linear lights that diffuse light from the ceiling. The result is a really bright focal point in an otherwise dark space, with wood slats on the ceiling to conceal the spotlights that create focused bits of light around the tables.”

Originally made to hang from the ceiling, UXUS adapted the Moooi pendants into more of a standing lamp, hung from a wooden arc to create a pavilion feel all the way along the façade, akin to something found on a veranda. “Decoratively they’re very sculptural, but simple in shape,” said Michell. “They have that kind of woven look, which is very similar to the baskets used in the kitchen, and fishing baskets you might see in South East Asia.”

Elsewhere in the restaurant, Seren & Lily’s Cabrillo pendants work alongside Habitat’s Birman suspension lamps to bring together the warm, natural tones of the interior.

“The way we selected the lighting was that per area, we actually had a very distinctive look, so the lighting enhances the look for each space,” said Cheung. “This helps people define the spaces and understand the intended purpose behind each one.”

The Mora S pendants by Zuiver do just this by creating a different zone in the lounge, making customers aware that each space is intended for a different atmopshere.

Another design element was the different roles that decorative lighting played in the transitions between day and night. At an airport, naturally the restaurant aims to draw people in at all hours as they travel between time zones. Michell told darc: “During the day, the fixtures are very sculptural, which helps create a focus around the seating areas, but they don’t really do much from a lighting point of view. At night, it’s the opposite. They become even more visual in their drama with light filtering through to create shadows, so they have two different decorative purposes.”

Involved in nearly every aspect of the project from interior design to food consulting, Kebaya was a dream job for UXUS. Michell added: “We had the time to work through any issues so what came out was really very close to what we were expecting and hoping for.”

Michell had the pleasure of stumbling across Kebaya as any other customer when he was in the airport and heard it had opened.

“I happened to be at Schiphol but didn’t know what the actual opening date was. I was going to my gate, and there it was! I was actually amazed at how similar it looked to our renders. The lighting was the most surprising part in that it worked exactly how we were hoping.

“I’ve now eaten there three times and it’s a really enjoyable experience. You have everything you might expect from a food court in Singapore where you find different cultures mingling around all this great street food there to be enjoyed. It’s a place where people can enjoy new things or find home comforts, and that is what travel, and essentially airports, are all about.”

Schiphol has fully understood the volume of overseas travellers coming through Europe, and caters for that customer profile.

With a growing number of travellers coming through from China and South East Asia to all over the world, they need their home comforts while travelling. Equally, western travellers are preferring to eat food that they feel is more exciting.

Many passengers have a choice in the modern day world of travel of which hub they pass through, if they are flexible with time and budget. Things like food and beverage experience play a vital role in that decision. On a subtle level, it affects how travellers think about airports, and Schiphol has been diligent about introducing that kind of innovation. Schiphol has a captive audience and UXUS has given travellers the opportunity to make tasteful and lasting memories.