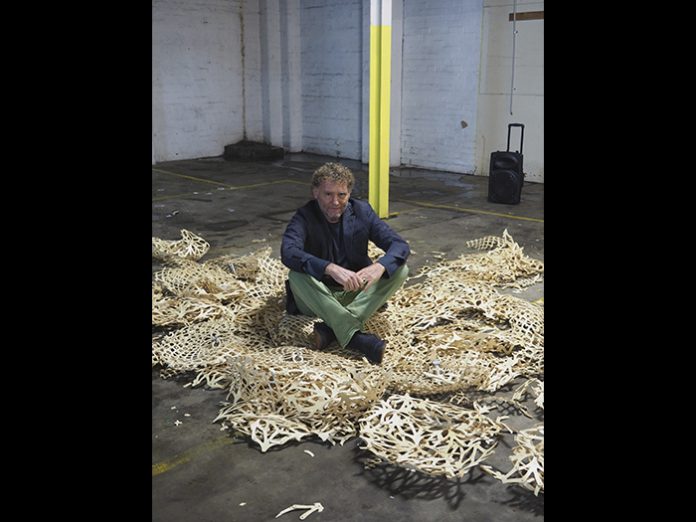 (Australia) – At a recent event in Sydney, David Trubridge destroys a pile of copies of his designs.

The aim was to alert Australians to the real cost of rip-off design products. On June 5th, at an event hosted by the Authentic Design Alliance (ADA) run by Anne-Maree Sargeant, David made his statement clear: “We will not put up with our designs being copied anywhere. It harms us, it harms the families my work feeds, it harms the entire Australian design industry and it harms the environment.”

International designer David Trubridge has been exhibiting his furniture and lighting in Australia since the early 2000’s. Many of his original designs hang within homes, offices and bars, but amongst them are pretenders: fakes made in China and imported into the Australian market, which has some of the weakest product design intellectual property laws in the world.

Citing Australia to be the “wild west of design copies” David, represented by Australian law firm K&L Gates, has won a significant battle against fake / unauthorised copies of his lighting designs.

David Trubridge’s team has fought for years to stop the fakes from being sold, some of which even find their way into leading big-box home chains. This recent landmark win has stopped multiple companies importing copies into Australia. One importer had a large number of lights removed from the market and destroyed as part of their settlement.

Last year David Trubridge Ltd (DTL) bought a fake from an online website in Australia and were surprised at the appalling quality of the copy, despite the store using images and text taken from the DTL website.

At the event, ADA director Anne-Maree Sargeant had a live conversation with David Trubridge discussing his recent landmark win. Following the talk David was joined by the audience in the destruction of a large number of fake Floral and Kina lights.

David said: “I don’t feel comfortable smashing these rip-offs as it goes against my ethos of care for this world, but the fake industry is harming much more than my own profits or sales so I must make this statement. When I was in Australia I heard many young designers had doubts about releasing their ideas there because they are immediately being copied and sold far cheaper and in bigger numbers than they can manage.

“Why would they stay and be ripped off when they can work in the UK where a design is fully covered for 70 years and copying is a criminal offence? ‘Protection’ is only 10 years in Australia, during which replicas are still allowed. I’ve seen my sales slip in Australia and there is a massive mindset problem there as people are fed the message that ‘replica’ design is somehow endorsed by the designer.”