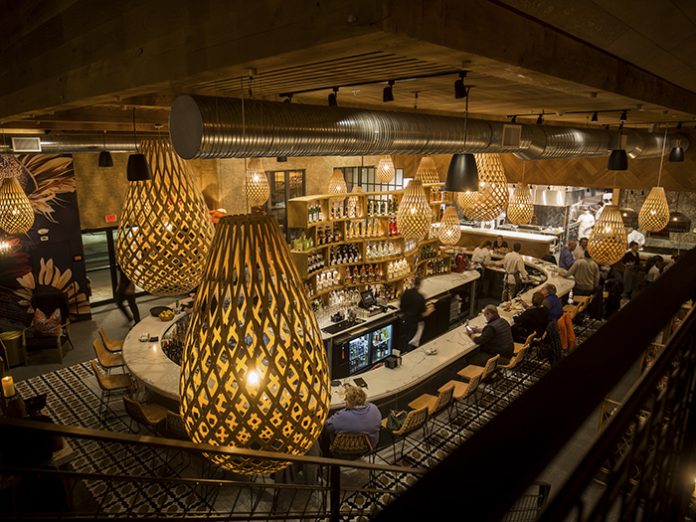 Tuscan Table, located in South Portland, Maine, is the latest venture in a trio of restaurants including Tuscan Bistro in Freeport and Royal River Grill House in Yarmouth. As with the other restaurants, Tuscan Table’s interior design was created by Nicola’s Home, a design company dedicated to injecting warmth and comfort into every space they design. Tuscan Table fits this remit perfectly with its use of wood, lighting that illuminates but isn’t overpowering and seating conducive to conversation and relaxation. The restaurant serves classic, simple Italian food with a menu designed by executive chef, Lee Skawinski, using the restaurant’s two rustic wood ovens.

”The restaurant location was a little out of the way so space had to be a destination that attracted patrons. The light fixtures were design elements that reinforced and helped drive the business goal of attracting customers and enticing them to keep coming back,” said Nicola Manganello, Lead Designer at Nicola’s Home.

The Kōura family of fixtures by David Trubridge were used to light the new restaurant. Six different sizes of Koura lights, all hung at different heights, enable variety whilst maintaining a cohesive style. The fixtures are made from bamboo plywood resulting in lightweight fixtures that don’t require ceiling reinforcement or specialised hardware

Koura is part of the Seed System family, a design philosophy developed by David Trubridge, to minimise the effects of shipping on the environment. On average every Seed System kit set is 1/30th the size of a fully assembled light and are easy to construct by following printed instructions included with the kit set and an online video.

“There is a fantastic notion at play in this project; Kōura is the Māori word for New Zealand’s’ native freshwater crayfish which are found in rivers and streams. Kōura was a nourishing food source for early Māori people, even the traps used to catch them were woven and looked very similar to our lights. So it’s great to see them used like this in a restaurant,” said David Trubridge, Lead Designer at David Trubridge Design.