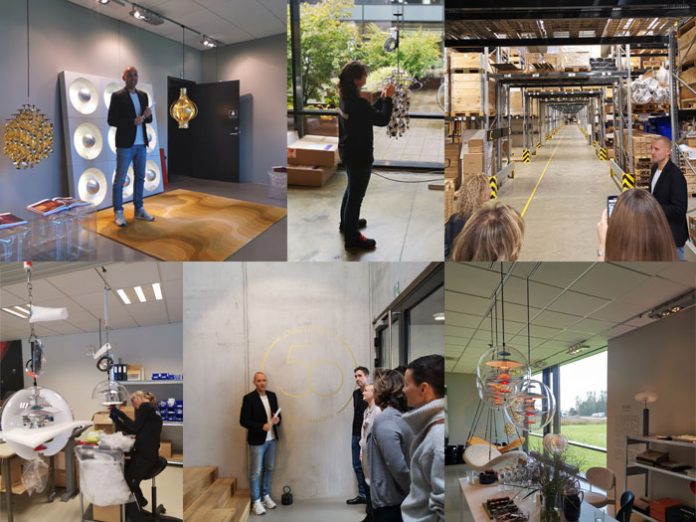 On 10 October, Verpan invited design journalists from Europe, America and Australia to visit its headquarters in Billund, Denmark, to celebrate the 50th anniversary of two of its most iconic Panton lighting products and the launch of a new one.

The VP Globe and Sprial pendant were both designed in 1969 by Danish Designer Verner Panton. “Only a few designs can stand the test of time and become true icons. In a close partnership with the Panton estate, we have reintroduced the two iconic pendants, which never cease to impress,” commented Verpan CEO Peter Frandsen.

The VP Globe is one of the most iconic pieces of the Panton catalogue. Its transparent acrylic outer sphere encases five internal reflectors suspended by three steel chains. Patches of red and blue add to the finishing touch of the futuristic orb design.

The Spiral lamp is a staple piece in the Panton collection and is a great example of experimental colours and shapes Panton would explore, along with how it interacts in its surroundings through sound and movement. The pendant is comprised of a series of chrome-dipped acrylic spirals hung at varying lengths, creating a statement piece.

At the end of the tour, the group were introduced to the newest addition to the lighting collection, the Sixty. The Sixty, originally designed in 1985, is a pendant and wall lamp and was originally developed for Royal Copenhagen but was first produced by Yamagiwa of Japan. Sixty consists of a disc-shaped shade finished with a brushed antique brass surface and a smaller reflector places below it to hide the light source. The hemispheric reflector is made from opal glass and gives off a soft yet generous light. The Sixty will be officially introduced in 2020.

To conclude the trip, journalists were welcomed to the Verna Mansion for a dinner and presentation by Frandsen, detailing the historic building that was once flamboyantly designed by Panton in the 1960s, but now has a more classic scheme, lit with the more modest Moon and Pantop Table lamps.

Verpan is a licensed manufacturer of designs by Danish architect and designer, Verner Panton. Working in close collaboration with the Panton estate – today managed by widow Marianne Panton – Verpan has the production and sales rights to a significant part of late Panton’s back catalogue of designs.