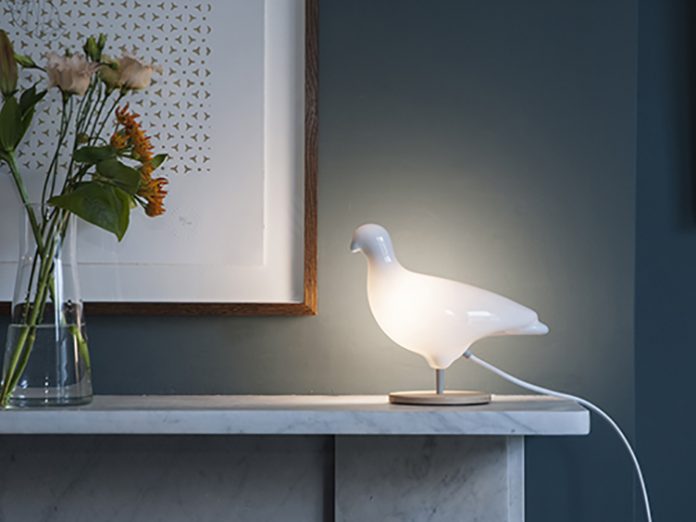 British manufacturer Very Good & Proper is to reissue the iconic Pigeon Light designed by Ed Carpenter to celebrate the 20th anniversary of its creation.

Originally designed in 2000 by Ed Carpenter, the Pigeon light started life as a project, while Carpenter was studying for his MA in Design Products at the Royal College of Art (RCA) in London. Devised as an alternative souvenir for London, the original Pigeon Light was part a reaction to the poor-quality products on offer in most tourist shops and also a celebration of the wildlife of London.

The original design was an exercise in simplicity. Consisting of a vacuum-formed Perspex shell on a wooden perch that attached to a ready-made ‘clothes peg’ foot. The light was fitted with an extra-long power cable that doubled up as a stand when looped and held with the clothes peg foot.

Initially produced by Carpenter in small batch for his RCA graduation show in the summer of 2001, the lamp was then spotted by influential design retailer Thorsten Van Elten and put in production as part of his newly born brand after being exhibited at 100% Design in 2002.

The Pigeon Light caught the public’s imagination and quickly became a best-seller and design icon. It was sold in design and museum shops all over the world, including the renowned Design Museum in London.

Twenty years later, Carpenter – now co-founder of leading British furniture manufacturer Very Good & Proper – has re-visited the design of the Pigeon Light and is reissuing it as part of VG&P’s own new e-commerce site. The designer has worked closely with VG&P’s in-house design team to update and further streamline the Pigeon Light’s design, resulting in a more refined, functional and minimal product, while still retaining the warmth and humour of the original.

The new Pigeon Light can be either free standing or wall-mounted, and the materials have been adapted to today’s needs. The light is made from high-quality and fully recyclable plastic with a wooden European FSC beech base and powder-coated metal weight stand. It comes in both a white and black version.

The first 1,000 Pigeon Lights come in a box featuring a special paper sleeve designed by London based graphic designers Studio Eger, which depicts the pigeon using a half-tone screen – aiming to capture the iconic shape using tone and shading, rather than line.