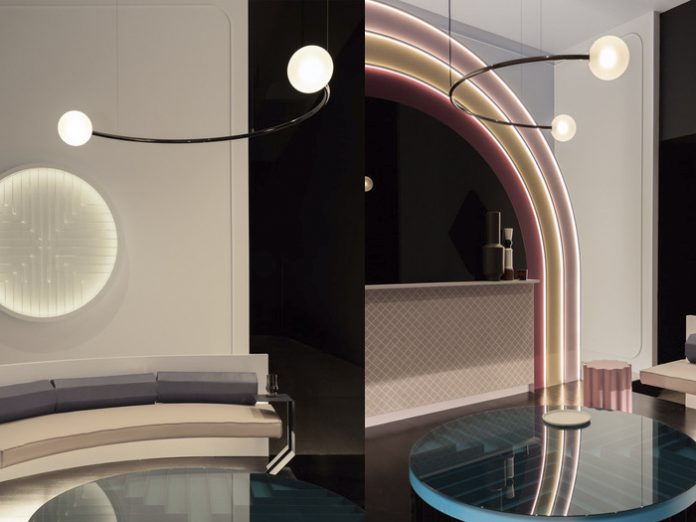 Highly commended by international judge Shashi Cann, Brustman’s installation for the prize, which includes Volker Haug’s Oddments pendant as its central feature, can be seen up until the 24 February 2019 at the National Gallery of Victoria (NGV) in Melbourne, Australia.

With this year’s focus on interiors, the NGV asked ten nationally renowned designers to broaden their approach in the creation of domestic spaces.

The intention behind Brustman’s design is to leave space for an occupant’s dreaming and imagination whilst providing a rich spatial framework that facilitates inspiration where a “world within a world” emerges. Part conversation pit, part stage, this curvilinear structure takes its cues from art deco bandshells where rooms become sets and people become performers in their own lives.

“I love the dreamy way the Oddments pendant appears to be floating,” writes Brustman. “It has an elemental quality to it which also works with the futuristic design reference for this project. I was initially attracted to this design for its lightness, beauty and simplicity. When I saw the Oddments pendant I knew it would marry with the overall design of the space perfectly.”