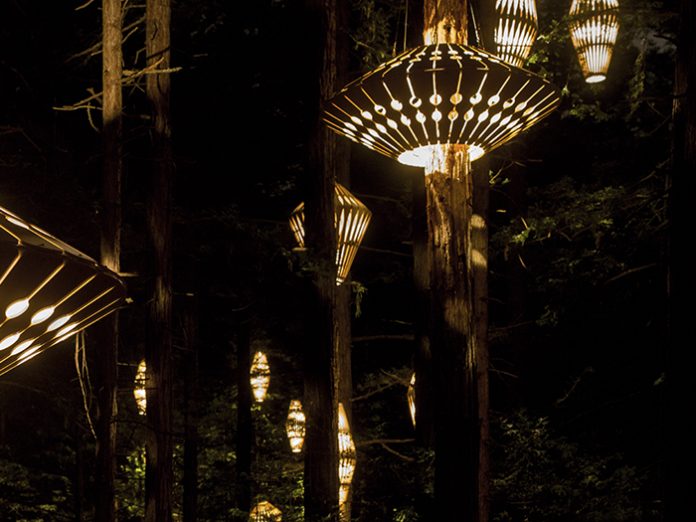 The new night-time attraction at Redwoods Treewalk, New Zealand, required custom made lighting on a gigantic scale in order to bring mystery and magic to the forest experience. Luckily, the team at David Trubridge Design were up for the challenge.

The new night-time experience offers visitors and locals the opportunity to explore Rotorua’s majestic Redwood forest under the shroud of darkness, illuminated by Trubridge’s bespoke designs that create an immersive and captivating environment.

“With 30 custom-made lanterns and a network of architectural lights, the night-time forest comes to life in a magical and surreal experience,” says Treewalk Director Kellie Thomasen. “Trubridge’s unique and inspiring lights add an amazing design element that is sure to become a much admired attraction within the forest.

“The idea to marry design and tourism remains relatively unexplored in New Zealand and enhancing an already magnificent environment like the Redwoods was no easy task,” continues Thomasen. “The Trubridge design team and the arborists at the Treewalk worked hard to place the 30, 2.5m tall lantern creations in areas embracing the natural beauty of the forest, to provide dramatic contrast for visitors. It will be an experience Rotorua can be proud of.”

In addition to the Trubridge lighting, over 40 infinite colour spots and feature lights illuminate the 115-year-old redwood trees, forest ferns and pungas.

“The Treewalk day walk has proven extremely popular and it was a natural progression to look for an innovative and world-class night-time product to offer additional opportunities for visitors to experience the city’s wonderful forest,” says Redwoods Treewalk General Manager Alex Schmid.

Located within Rotorua’s Redwood Forest, which attracts more than 500,000 visitors annually, the Redwood Treewalk is the world’s longest suspended walkway. The walk, consisting of 23 elevated swing-bridges and living platforms, showcases one of Rotorua’s most visited natural attractions.

Speaking with darc exclusively about the project, the David Trubridge team explained: “We became involved through a previous project with the owner of the Redwoods Treewalk. After experiencing how our existing range of lights come alive at night, they saw the potential of the night time experience in the treetops and asked us to turn their forest into a night-time wonderland!

“The initial brief was to design and produce a series of decorative lights to hang in the Redwood forest to create a night-time offshoot. It took almost twelve months from initial brief to the opening of the Night Walk experience to complete.”

As the project is outdoors, sourcing materials suitable for outdoor conditions was a challenge for the team, however during initial explorations for the project they found a new product that had just launched to the market that has a 30 year lifespan and is highly sustainable – the perfect solution, as the Rotorua geothermal enviornment has the added complication of corrosive sulpher fumes.

“The other big issue was the scale,” the team told darc. “The forest environment is vast compared to the architectural spaces we’re used to and our normal lights would have been totally lost in it. As such, we had to design the lights in a larger form to compensate – they looked ridiculously enormous in our workshop!

“We had to move from our usual method of clipping together thin pieces of flexible plywood to bolting much thicker, rigid pieces onto a custom made stainless steel frame. As we built prototypes we learnt more about the structure and how to stabilise it.

“As well as the size and material issues, because of the fragile and dense nature of the forest floor, the large lights couldn’t be carried in, already assembled. We had to send up a shipping container with everything we might need packed inside, then assemble each light in situ right below where it hangs.

“The lower canopy of bush was thick and up to three-metres high and as such, the install team devised ways of swinging the lights into place using ropes so that the forest wasn’t damaged. Only fabric straps have been used, wrapped around the trees with the horizontal suspension lines connected to them, to ensure the trees can expand without any permanent fixtures or damage.”

A team of skilled climbing arborists were involved in the installation and continue to maintain the lights – some of which are up to 25m above the ground! As the project progressed, aspects of the initial agreement had to be negotiated; the number of lights had to be reduced to fit the budget for example, yet the arrangement still had to achieve the same aim of creating an exciting experience for visitors.

The decorative element of the lighting was the only driver for this project, with the installation of lights creating a whole new visual experience, emphasising the natural beauty of the forest by illuminating it in new ways. The intensity, specularity and direction of the light were key considerations throughout, as the team didn’t want to add to light pollution by aiming the light skyward.

“We discovered that much less light was actually needed in the darkened forest environment to achieve the desired lantern effect,” the team told darc. “Trying to control glare from the light sources while still maintaning the lovely shadow play on the forest floor was also a significant challenge.”

To overcome this, the team built three test versions, which were installed in the forest before completing the final order. This allowed them to ensure they had the correct light levels, that the concept worked and that the designs were as good as they could be.

In order to achieve their goals, the David Trubridge team also worked closely with New Zealand lighting manufacturer Hunza, which makes a waterproof downlight housing. The locally made products are precision engineered out of the highest quality materials and meshed well with the lighting design needs, they also fulfilled other considerations such as long life span and servicability.

Reflecting on the project, the installation was all the team had hoped for and more, as they explained: “None of us had anticipated just how well the lights would work in among the giant redwood trees. There is a reaching perspective, accentuated by the overlaying silhouettes of trunks and branches as the carefully placed groups of lights appear in the distance. The scale is so large and yet the effect so enveloping.”

There was no second chance for the team once they had strung all the wires – it had to be right first time! As such, the design team went around the walk, very carefully visualising how they would look in order to work out the best placements.

“Our lights have created a new sense of wonder in the natural environment and encourage people to enjoy and rethink the outdoors. The combined sensual experience of being in a forest at night, 25m high on a swaying platform looking out to seemingly weightless giant lanterns, illuminating the trees is memorable and romantic.”

The lighting created by the David Trubridge team is the entire design and defines – in fact, creates – the space and the experience. Some of the lights hang inbetween the trees, casting patterned shadows on the ground below – not unlike the nearby spreading Punga Tree ferns.

“The most successful light for us, is the tree-hugging Titi, which has been built around the tree trunk,” the team added. “It is partly inspired by the bracket fungi that similarly grows on tree trunks and was David’s idea, but he had to fight hard to keep it when it was becoming difficult to make and install!

“Because it is more expensive, we had to compromise with less of them. The most challenging part was working out how to install the horizontal luminaires so that they weren’t directed at the walkways.

“We are proud of the natural cohesion happening between the lights and the forest and are especially proud that we completed this demanding project ahead of time and within budget.”