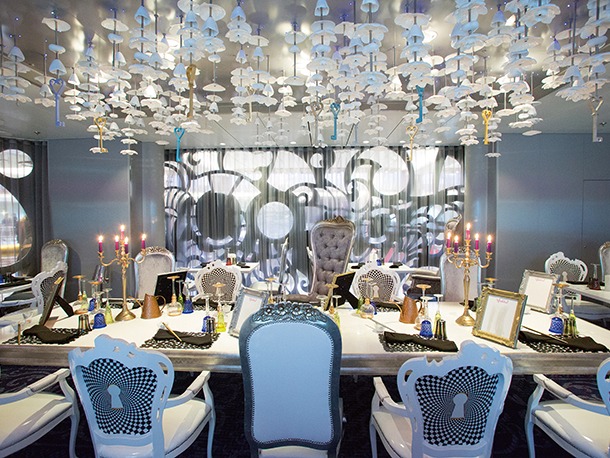 A new technology cruise ship has landed in the Caribbean Sea: Quantum of the Sea of the Royal Carribean. Pushing the boundaries of technology and innovation, the new Quantum Class ships showcase advanced technology; from a 300ft high viewing capsule, North Star, to a skydiving simulator.

One of the eighteen restaurants aboard, the Wonderland, carries within it a bespoke lighting feature. In this area, that seats only 62 guests, an exclusive culinary experience has been lit by a magnificent chandelier from La Murrina.

Technological development, attention to detail and passion are the characteristics of this unique environment that offers a journey into the world of the imagination of Wonderland.

The chandelier, which was designed to enhance the experience on board, has meticulous dimensions (2,204mm x 4,262mm) and consists of approximately 500 fibreglass elements of different shapes: flower open, corolla bell-shaped, heart and key.

Decorative elements are fastened to steel rods of various lengths, some of which are lit by a fibre optic system. Two projectors emanate light of different colours to create the effect of a starry sky, while a third projector illuminates the elements of the composition.

The system is controlled via Digital MultipleX offering to passengers spectacular games of light. Wonderland was a challenge won by La Murrina and its team of engineers. It was the first project of its kind made at the company’s headquarters in Turate, Italy.

The lighting concept was developed around the tale of Lewis Carroll’s Alice in Wonderland. The idea was to tell a story starting with the interior design, colour, scale and reflection to infuse elements of surprise and delight throughout the entire dining experience. Wonderland intends to bend the realities of what a restaurant is. The magnificent chandelier offers a journey into the imagination.