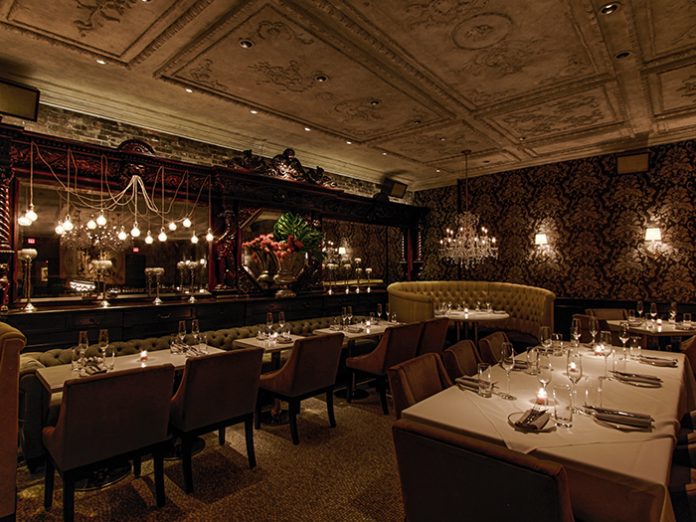 Yvonne’s restaurant is a modern reinterpretation of the early 20th century supper club. Drawing inspiration from its predecessor, Boston’s iconic Locke-Ober, the owners took a hands-on approach to Yvonne’s design, working closely with Focus Lighting to develop the entirety of Yvonne’s luxurious and sophisticated interior.

Early collaboration with the owners allowed the lighting designers to influence design decisions that produced a subtle layering of modern lighting elements to accent the restaurant’s historic interior features. Decorative fixtures were then pushed to the forefront as visible sources of light, all working to reinforce Yvonne’s’ old-style aesthetic.

“The nature of Yvonne’s design involves so many intricate details such as the ceiling coffers, tables, bars and so on. These were all important to highlight,” said Focus Lighting’s Ryan Fischer. “Finding creative ways to use each lighting element was vital. To uphold the restaurant’s concept, it was important to conceal all modern lighting elements within the architecture. This was accomplished through a great deal of collaborative on-site work creating lighting effects and millwork simultaneously.”

Five concealed layers of light work to highlight intricate details in a 140-year-old hand-carved back bar. Track accents hidden behind a dropped soffit graze the textured cabinet doors and griffin sculptures from above; while LED tapelight integrated into stemware cases and bottle risers creates hundreds of sparkle points to reflect in the pieces of glassware displayed behind the bar. It was also important that the lighting complemented the guest’s appearance and so a sixth layer at the bar produced by old-style bar top lamps reflects softly off the bar and onto their faces.

The project’s collaborative nature influenced a number of subtle changes over time. Fischer presented the owners with a lighting study explaining how white table tops (instead of a dark finish) would provide seated diners with an additional layer of light reflected from recessed fixtures above. This ultimately convinced them to use white table tops throughout the entire restaurant.

In the main dining room, the location of over 60 recessed table accents was coordinated prior to the assembly of a 30,000-piece ornamental ceiling. Fischer strategically positioned each fixture to avoid intersecting with the ceiling’s embossed scrollwork, sculpted borders, and molded cherubs. Black baffles in every recessed accent almost completely eliminate glare, and decrease fixture visibility within the ceiling. A group of crystal chandeliers hanging in the centre of the room uplights the ceiling to reveal its ornate detailing.

Past the main lounge, glowing bookshelves in the library lounge captivates in the mystery of its invisible light source. Custom millwork allowed Fischer to integrate LED tape light into the lip of every other shelf, creating depth and visual interest with an intimate layer of light.

“Decorative elements were integral to the lighting design as they help reinforce the restaurant’s old style and luxurious aesthetic,” said Fischer. “Side light from wall sconces emulates that of original gas-fed light, while crystal lamps and chandeliers add a layer of sparkle.

“We were all very happy with the final result. Our first time turning on the bookshelf lighting, the entire room stopped for a moment in awe.

“The lighting throughout works seamlessly with the restaurant’s historic interior to transport guests back in time to the 1920’s and 30’s.

“We wanted the space to feel like an underground speakeasy, so we closed off existing windows in the dining room and lounge areas and eliminated any natural light.”

With refurbished and refashioned old-style lighting fixtures pushed to the forefront, while modern architectural lighting elements work behind-the-scenes, the lighting design at Yvonne’s successfully reinforces the opulence and sophistication the owners envisioned.

“Working with the owners without a design architect was a new experience for me. Chris and Mark had a clear concept and goal, which made the design feel almost effortless,” concluded Fischer.